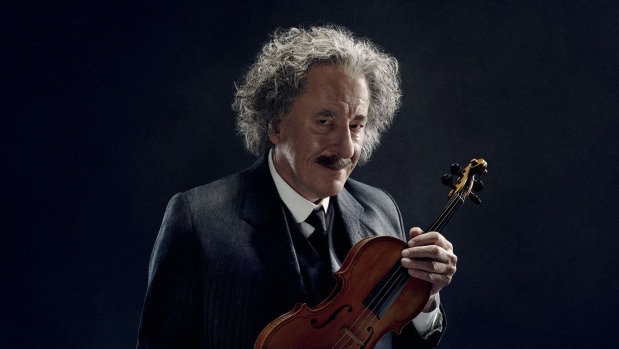 For an actor who’s portrayed everything from a schizophrenic pianist to a zombie pirate, playing Albert Einstein was no big stretch.

But it took the Oscar wining Geoffrey Rush a while to realise he was a character actor.

“When I was shooting Pirates of the Caribbean, once I had that big hat on with the feather in it and the monkey on my shoulder, the rest was not brain surgery,” he says.

The same applies to his latest role as one of the 20th century’s most profound thinkers in National Geographic’s Genius which started screening in New Zealand this week.

Rush sees Einstein as more than a super nerd with funny hair. He sees him as an heroic figure.

“From all the great classical writing that’s ever been in the theatre or in the cinema, you have a central protagonist who has to shift … as events around them push them into better levels of survival or a fresh strategy,” says Rush.

“And that happened to Einstein, always, through his life. And [it] was also tempered by the fact that he had a personality that was very anti-authoritarian. He’d given up his German citizenship as a very young man because he didn’t believe in a militaristic state,” says Rush, who plays the older Einstein, while the younger is portrayed by Johnny Flynn (Lovesick).

“He was a glass-half-full kind of guy,” continues Rush, who’s now 65. “He always saw the better side of humanity, but then had to confront the development of atomic weaponry … So he’s poised very dramatically in the centre of the drama.”

The series is produced by the famous team, Ron Howard and Brian Grazer, who are responsible for such films as A Beautiful Mind, The DaVinci Code and Apollo 13.

“When I first read the script I was not only looking at the definition of what is genius. I didn’t want to go down a kind of IQ-intelligence-quotient-path of study,” says Rush.

“So, I started doing some private research and just looking into what defined genius. And I came across, fortunately, this very good quote from Schopenhauer – he’s a German philosopher – it’s quite a nice aphorism. He says, ‘Talent is a target’, ‘Talent hits a target correctly’, or something like that. ‘A genius hits a target that no one can see.’ And that meant a lot for me.”

The Australian actor wanted to portray Einstein as the man behind the scientist.

“As I’m reading it [the script], I’m thinking, I can hear Groucho Marx delivering these lines. And I can see Harpo visualising some of these lines.

“There’s a kind of deep-rooted Yiddish spirit or level of wit that he was obviously very good at because when you see some of the footage of when he first went to America or Britain, and he got off the boat, within seconds he’d have a group of newfound friends or reporters cackling pretty seriously.

“So, his optimism and sparkle is very present in his humanitarian outlook. And he seemed to work a lot off of comic presence.”

Flynn thinks that humour was an essential part of the great thinker.

“To see some of the things that in his personal life, with him as a young man – and the tragedies that he went through, and these huge world events, these global events, the two world wars and everything that was going on in Europe in the early 20th century, and his personal stuff – to see the humor in the context of that is really important,” says Flynn, 34.

“And that’s not what you know of him as a layman. That’s not what I knew of him before embarking on the project. So, that’s what’s been really cool, is to see the reason … we find humor in tragic circumstances because that’s the human spirit coming through.”

Einstein was also naturally witty, says Ken Biller, executive producer and show runner of Genius, which was filmed in the Czech Republic.

“While I’d like to think that we’ve written some clever dialogue for him, some of the cleverest dialogue is dialogue that he wrote for himself because we’ve sprinkled into some of these scripts Einstein-isms; things that he either said or wrote that were really perceptive and often quite funny,” he says.

Howard, who directs the first episode, reports that the initial script presented young Albert as a bohemian artist with a maverick sensibility that sometimes thrust him into trouble.

Genius is screening on Sky’s National Geographic channel on Mondays at 8.30pm.