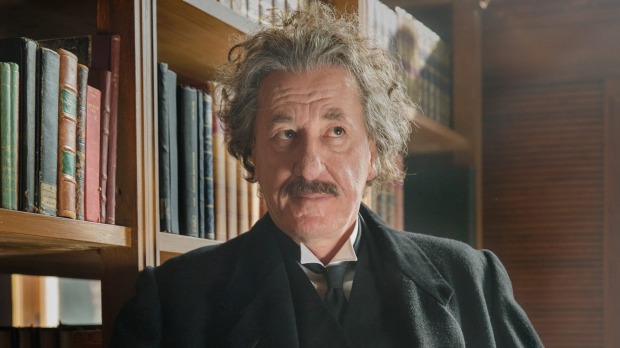 Albert Einstein, who 62 years after his death remains the world’s most famous scientist, once asked, “Why is it that nobody understands me, yet everybody likes me?”

Genius, an engrossing 10-part drama, puts Einstein under the microscope.

It investigates this very question and asks why – even though probably only a handful of people in the world can fully explain his Special Theory of Relativity – the German Nobel Prize-winning theoretical physicist is still so hugely popular.

Directed by Ron Howard and starring Geoffrey Rush (Shine) as the older Einstein and Johnny Flynn (Song One) as the younger version of the great scientist, the drama tells the story of one of the most important figures of the 20th century.

Everybody knows about Einstein’s ground-breaking scientific discoveries and the image of the eccentric professor with the wild hair. But few are aware of the complete story of the turbulent private life of one of history’s most influential figures.

The series demonstrates that Einstein was far removed from the stereotype of a dour, humourless scientist locked away in a dusty laboratory. A witty, charming humanitarian with an infectious lust for life, he truly embraced the world.

A lifelong pacifist, Einstein fled the Nazis in his native Germany and was heartbroken to be linked to the development of the atom bomb in America even though he never worked on the Manhattan project.

He was a nonconformist who would go out in pyjamas and, if he couldn’t find any other shoes, his wife’s sling-backs.

Einstein was no saint, however. He was an insatiable womaniser who constantly cheated on his two wives and had terrible relationships with his children.

Rush jokes that, ” ‘Stud muffin theoretical physicist’ is what he put on his tax form.”

Chatting to TV Guide in London, Rush exudes the same sort of natural magnetism, vibrant sense of humour – and unkempt hair – as his screen alter ego. He reflects on why Einstein is still seen as such a towering figure.

“He was the most astonishing, admirable person. Given the way the world is at the moment, I feel that he is a rarity. He’s a hero in a story about science.

“There aren’t many role models around at the moment who have that kind of empathy, compassion and curiosity.”

Einstein once modestly said, “I have no special talents, I’m only passionately curious.”

Rush, an Australian who won a Best Actor Oscar for his memorable portrayal of another genius, the pianist David Helfgott in Shine, continues that, “Einstein became famous for his work on the same level as Charlie Chaplin. You can understand why Chaplin became so famous because he was a great cinema clown and could work without language.

“But to become famous as a theoretical physicist and have a political and philosophical standpoint as well as being a genial, charming personality with an interest in how the world works – well, that is quite astounding.”

Rush, who also gained Academy Award nominations for his performances in Shakespeare In Love, Quills and The King’s Speech, adds that, “There is a glow about Einstein’s mental and humane capabilities that people constantly find sustenance in. He said, ‘We’re all different, so let’s ask questions and deepen human experience’. He had a fundamental goodness that he radiated to the world.”

With his out-of-control hair and tongue sticking out, Einstein has become an iconic image that adorns posters and T-shirts. Rush reflects that, “Einstein is an emoji. He is that guy with the hair exploding like an atomic bomb. In fact, I’m going to write to the emoji people and say, ‘You’re missing something here’ and claim a commission.”