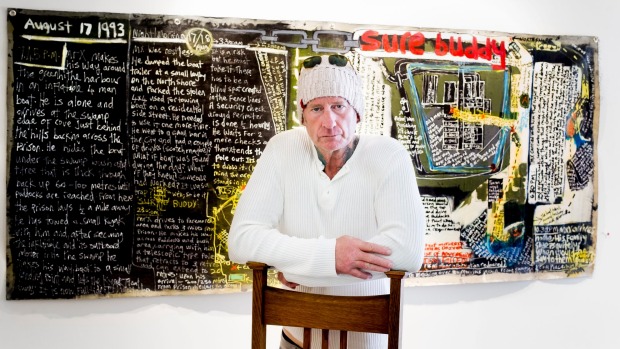 For more than three decades, Simon Kerr expressed himself as a burglar, leading a notorious criminal gang and breaking into ATM machines.

Now living in Kerikeri with his partner, Ella Grant, and two young children, the 55-year-old has a criminal history that spills over pages. Spending 18 years of his life behind bars, prison was a world that confined him, until it recently led him down a new path.

For it was within the walls of Northland’s prison, in an art room, that Kerr picked up a paint brush four years ago and began expressing himself in a profoundly new way.

It’s a feel-good story talking to the former prisoner just after his sixth solo exhibition has opened at Wellington’s Potocki Paterson Gallery, even though he says nervously that he doesn’t want to be painted as a prison success story.  The exhibition, called “On the Way To The Opera with the Drug Lord and Mr X”, is a collection of colourful paintings scrawled with narrative.

Of his last five art exhibitions, Kerr missed many of the openings because he was still behind bars. Jail meant he missed his five-year-old daughter Johnny’s birth.

“I thought, wow, art is something I’m more passionate about than crime, and it’s going to provide a living for my family,” he says.

First sent to Mt Eden Prison at 16 for burglary, in the 1990s, Kerr was the leader of the notorious “hole-in-the-wall” safecracker gang that ripped out safes and ATMs on a nationwide rampage. Escaping with thousands of dollars in jewellery and cash, the gang went on a year-long crime spree.

Most of Kerr’s escapades were well documented in the media, and he doesn’t want to go over them.

Does his new identity as an artist spell the end of his criminal past? Nodding his head in the light-filled gallery, Kerr says: “It’s a process you know. Anyone who gives up crime because of a fear of going to jail hasn’t given up crime. I hated jail. I’m not changed in my direction because of that. I’m a contributor now.

“I’m blessed that God has given me a vehicle, and it’s all very well to celebrate that, but 8000 men and women are in jail, and a large proportion of them are recidivist offenders. They don’t have a vehicle to drive away and do something else.”

Kerr’s lightbulb moment came in 2013, while he was serving a 6½ year jail term at the Northland Region Corrections Facility for breaking into an ATM machine. During a lockdown, he went into the art room and asked if he could paint something but was told there were no spare canvases.

He found an old board and the tutor said he could use it. Furious and angry, he began painting a Ned Kelly, writing on it: “This is just what my life is”.

He says the prison art tutors, Sandra Harvey and Beth Hill, broke the rules for him. “They said, `I tell you what, you just paint’. They had enough confidence in me. I didn’t want to do an art programme and learn a technique”.”

Had it been some time since someone had believed in him? “Nah, a lot of my mates believed in me, when I was like, `Hey let’s burgle this’, eh?”

“It was a collision, which I’ve always had with Corrections and the law, but this time, there was a deep desire to find something else. It was a different sort of collision.”

Harvey gave him two canvases and told him to go away and paint.

He quickly painted 10 works. An art critic, Mike Nettmann, visited the prison, liked what he saw, and gave Kerr an art book. Nettmann says: “It’s very honest work. He doesn’t want to learn about technique and he doesn’t have to because he is a storyteller in his art and it is very powerful stuff.”

Kerr gifted his works to his partner Grant, who organised Kerr’s first solo exhibition, at the Whangarei Art Museum. “Ella was ringing me and telling me they were selling. I couldn’t believe it.”

Along with his prison art teachers, Kerr credits his mother, Raewyn, for his talent. He has fond memories of sitting in bed with her as a child, listening to the music she played on her stereo and picking out the instruments. His mother, says Kerr, was a creative person, a watercolourist who exhibited in Europe, and was also a dancing teacher.  “This is about my mother. She made me who I am.”

Kerr’s criminal behaviour was certainly spectacular in its day. In one raid, Kerr’s gang ripped a 1630kg safe through walls at the BNZ branch in Mt Eden, fleeing with $30,000. In Christchurch, Kerr and his gang used the same technique to grab a safe packed with $50,000.

Escaping six times from custody, he once stowed away on a cargo ship to Australia. In 1994 he made headlines again when he and another prisoner barricaded themselves on the turret at Mt Eden Prison, protesting for better conditions in the remand wing. Renowned as articulate and intelligent, he always represented himself in court.

To those who are angry about his criminal past, he says: “I understand and that’s flak that I will take on board.”

“Some of it will be true. What is good and what is bad? What is right and what is wrong? This was my thinking then, and I don’t know if it’s changed greatly.

“Jewellers have a 400 per cent mark up. They’d say their safes had been robbed. A lot of people are profiteering. In the bigger scheme of things, how big a thief was I? But I take responsibility for what I did. I really do.”

Breaking up our chat, he needs to take his partner for a coffee. Grant is about to take a flight back to Kerikeri, to their two young daughters, Jo, 7, and Johnny, 5, and to support her father, who lives with them and was recently diagnosed with terminal cancer.

Like any devoted partner, he’s worried about Grant, who he met eight years ago. Will she make her taxi?

The couple had four years together before police raided their house in Pukehina, south of Tauranga and arrested Kerr in 2011.

Kerr says the turning point in his criminal journey was meeting Grant, and having their two daughters. That made him realise home was where he wanted to be – not on the run.  “Ella’s amazing, you know,” he says, and smiles for the first time.

THE STORY OF MR X

So who is Mr X of the exhibition title? Kerr says that on the night of  August 18, 1993, there was an escape from the maximum security prison at Paremoremo in Auckland.

He had been in prison with Mr X – who has never been identified – but was released before Mr X escaped. Showing the story through his paintings, Kerr says: “Contrary to some media reports that other escapes have taken place from maximum security, the facts are that only three men have ever escaped from there. Only one man has both broken into and out of the maximum security prison and that is Mr X.”

(All the evidence, including references in the painting to “Brian and Jeff”, point to the episode in question being the 1993 escape by a notorious drug trafficker, the late Brian Curtis, and convicted murderer Michael Jeffrey Bullock.)

Kerr says: “It’s about giving your word to someone and what that means. I’ve found in my life that I can give a little bit to a lot of people as a helper. If any message can be gained from this, I’m conscious of what is happening to our youth. It’s thinking about things that might get them into trouble.”

Jacqui Moyes, Arts in Corrections Advisor with Arts Access Aotearoa, says Kerr has composed a “brilliant collection of work” that tells an important story about the effects of incarceration and the way it can shape a person’s moral code.

“Simon is an insightful, creative person who produces work about tough subjects. His work Sure Buddy is a powerful tale of commitment and remorse, a response to the things we will do to keep our word when we are living inside a different reality, amongst other people’s grief and loss.”

What’s next for Kerr? Having written a screen play, he hopes to make a feature film, while he also has a new art exhibition opening in Whanganui with artist Scott McFarlane.

“I hope this exhibition will encourage others not to be deterred by obstacles and to free themselves from the mould they’ve become stuck in,” says the former prisoner.

* An exhibition featuring artwork by Simon Kerr, On the Way to the Opera with the Drug Lord and Mr X, is on until April 21 at Potocki Patterson Gallery, 41-47 Dixon St, Level 1, Wellington.