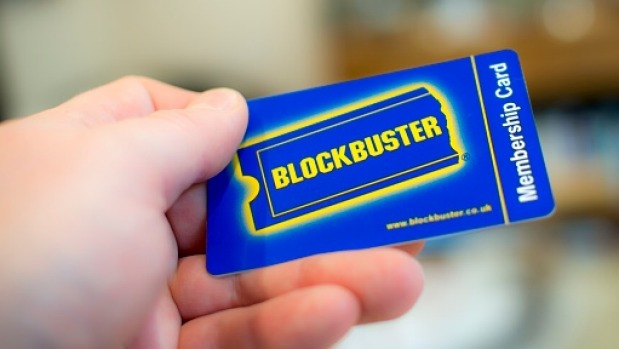 For families across the globe, driving to the local Blockbuster Video was a Friday night ritual.

The kids fought over which movies to rent, parents had to pay off the late fees and all succumbed to the popcorn and candy buckets at the register.

Blockbuster once operated 9000 stores in the US alone, bringing in US$6 billion (NZ$8.7b) in annual revenue at its peak. In 1989, a new Blockbuster was opening every 17 hours.

But the image of the blue-and-yellow ticket stub logo now merely evokes nostalgia and memories of a time before Netflix, before online streaming, before some laptops eliminated DVD players altogether.

READ MORE:
* From cutting edge to obsolete – the fast approaching end of the DVD store
* 13 Reasons Why rating puts the kids back on the couch with us
* A guide to NZ streaming services
* What’s new in 2017: Nine must-watch Netflix shows

After a long decline, the video rental business declared bankruptcy and its new parent company – Dish Network – began closing all remaining retail locations in 2013. Netflix had won, and Blockbuster was dead. Or so we thought.

At least 10 known Blockbuster stores have managed to stay afloat in the US in the digital age. However, the largest cluster of Blockbuster stores are not on the mainland, but in Alaska, where dark, long winters and expensive Wi-Fi have helped maintain a core group of loyal customers.

“A lot of them are still quite busy,” Alan Payne, a Blockbuster licensee-owner, said. “If you went in there on a Friday night you’d be shocked at the number of people.”

‘WE JUST KEEP PLODDING ALONG’

Payne owns eight of the last surviving Blockbuster stores in the US, including seven in Alaska and one in Texas, employing about 80 people in total. He first purchased Blockbuster franchises in 2000, just years before the industry as a whole began to decline. At one point his Austin-based company, Border Entertainment, owned 41 stores across the country.

After the 2008 recession hit, and after Netflix began to emerge as a major threat, Payne and his team of managers said, “OK, we’re going to do this as long as it makes sense.”

Business indeed took a tremendous hit, and sales have been on a continual decline. In 2013, 40,000 people were coming through Payne’s stores, and that number has now dropped to about 10,000. Just this week, one of Payne’s last two Blockbusters in Texas closed.

He didn’t think his stores would last past 2016, but through a “managed downscaling” Payne has managed to keep them profiting, without making any cuts to employee salaries and without any support from Blockbuster’s owner, Dish Network. He simply pays a licensing fee to use the business name and logo.

The stores’ survival has depended on aggressive real estate deals with landlords willing to offer short-term leases and reduced rent. It has required running the business “a lot differently” than Blockbuster ever did, avoiding what Payne calls “a contentious culture over late fees.” Unlike the old Blockbuster, Payne’s version never sends out invoices to customers for late fees; they are simply collected whenever they come into the store. But he has also refused to eliminate late fees entirely like Blockbuster did, a decision Payne calls the “final nail in the coffin.”

Still, a great deal of the business’s endurance has come from the core customer base in Alaska, primarily made up of older people. Alaska ranks high in disposable income among the states, due to good-paying jobs, exceptionally low taxes and payments from reinvested oil savings. Moreover, internet service is substantially more expensive than in most states, since most data packages are not unlimited. Heavy Netflix streamers could end up paying hundreds of dollars per month in internet bills, Payne said.

For this reason, a hefty 20 per cent of sales in Payne’s Blockbuster stores come from rentals of TV shows – from the “binge watchers,” he says.

Alaska’s cold, long and dark winters also lend themselves to plenty of in-home entertainment, Payne said. The most profitable Blockbuster store is in bitterly cold Fairbanks, where temperatures can reach 50 below zero.

Most of Payne’s managers have remained in their roles for at least a decade, riding out the wave of closures and declining sales. If any of them were to leave now, Payne said, “it would be impossible for me to go out and hire a new management team.”

But Payne said, “They love the business, they don’t want to see it to the end.” What has kept his managers around for so long is also what has kept Blockbuster alive – the interaction with customers.

“There’s not a whole lot of retail businesses that people go to because they truly want to,” Payne said. “When you went on a Friday or Saturday night to rent a movie … that was just fun.”

In fact, more than half of Blockbuster’s revenue is generated during a six-hour period on Friday nights, Payne said. “Most of our people remember those days, and it’s still fun to be there on a weekend.”

When asked why people keep coming to his store, Kevin Daymude, the manager of a Blockbuster outlet in Anchorage, said: “Easy. Customer service.”

“Everyone likes to feel like they’re special and that they can talk to someone face to face if they have a question,” Daymude said. He has known some of his regular customers for more than 20 years. Despite its challenges, he has stuck around because he still believes in Blockbuster, “our little company in the ‘Last Frontier’” Daymude said.

“When you go in the store, walk down the aisle, you’re going to see all kinds of things you never thought of,” Payne said. There’s something about finding a “diamond in the ruff” on a shelf that is simply more gratifying than scrolling on a computer screen.

Yet Payne accepts the reality that it’s only a matter of time before he is forced to close his Blockbuster stores for good.