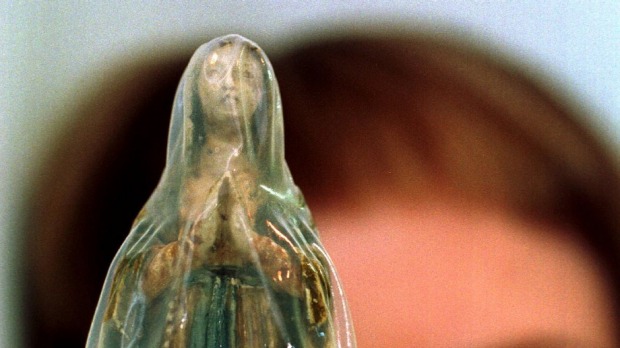 Art was a commando with a hatred of art — this art at least. His commander was none other than the Virgin Mary and his army a 200-person vigil of prayer.

Rolling towards them in central Wellington was a truck, the numbers 666 and comic character Hot Stuff The Little Devil painted on its front.

In the back – about to be unveiled to God’s army – was a re-enactment of Jesus’s Last Supper. Playing the role of Jesus was a topless Heidi Borchadt.

​As the doors opened, most in the vigil paid it little mind, though some had to restrain their children.

Vigil participant Anthony Stefanou raced after the truck as it pulled away.

“Why don’t you arrest these people?” he yelled.

“It’s disgraceful. They [police] should have arrested the driver straight away.”

The dramatic scenes on the forecourt of Te Papa, New Zealand’s national museum, came down to a sculpture measuring just 7.5cm that was displayed inside the museum.

It was called Virgin in a Condom, a creation of  Tania Kovats that featured in the show Pictura Britannica.

Kovats was part of the “brat pack”, a group of British artists championed by advertising magnate Charles Saatchi, and whose most famous member was Damien Hirst.

Almost from the show’s opening, the 7.5cm statue – literally a statuette of the Virgin Mary covered in a condom – sparked outrage.

“To refuse to remove this beloved statue enshrouded by a condom, which causes such grave offence to so many New Zealanders, must surely mean that the Museum of New Zealand can no longer be called a ‘place for all New Zealanders’,” Wellington woman Amanda Sutherland said.

“A `Vehicle for Cultural Mockery’ would be a more appropriate line.”

Museum curator Ian Wedde said it had received about 40 letters of protest and several phone calls asking for it to be removed within days of opening.

Arthur Skinner – Art to his friends – was at the forefront of the outrage. It was he  who started a group called Catholic Action after his parish priest protested against the sculpture from the pulpit.

“I’m going to go down there and I’m going to pray in reparation before this statue and I’m going to ask God’s forgiveness and mercy on our country that we’ve done this to an image of His Holy Mother,”  he said, rosary beads clutched in his hand, as the debate raged.

“We don’t have any woozy ideas about the Blessed Virgin. She is the commander, she’s the queen of heaven.

“A queen has troops, the angels if you like, in the spiritual order, and her foot troops on the earth, in the natural order. She’s the boss and she commands.

“She wants the best for God and for her son. Some people have called us the Blessed Virgin’s commandos. And basically that’s what I’m about at the moment.”

His anger was not just aimed at the museum – outside which he led prayer vigils each weekend – but also at bishops, who he said had lost their way.

During the show two people appeared in court: one for assaulting a museum worker,  the other for smashing the glass case surrounding the statuette. Four others were arrested while taking part in demonstrations. Museum staff were threatened.

Speaking this week, Borchadt – aka topless Jesus – recalled how she would watch the protests from the window of her warehouse flat opposite Te Papa and the counter-protest plan was hatched.

“It is not really you any more. You are just a body there to make a point.”

She recalls getting ready then being “whisked off down to where the truck was”.

Businessman David Blackmore had the truck ready so they drove to Te Papa concealed behind the sliding sides of the truck’s canopy.

She remembered boos and chanting and one lady who called her a witch when the truck’s side opened to reveal the re-worked Last Supper.

“You just had to stay really calm – no reaction.”

After a short stay the sides were shut – perhaps by police – and the truck drove off.

Police stopped them in Courtenay Place and let her off with a warning, rather than a charge of indecent exposure.

In the aftermath, friends, and customers at the cafe where she worked, were predictably supportive but it was a meeting with an 80-year-old religious woman, weeks after, that made the biggest impact, even if  the woman did not like the artwork.

“She just liked that it created discussion because discussion is healthy.”