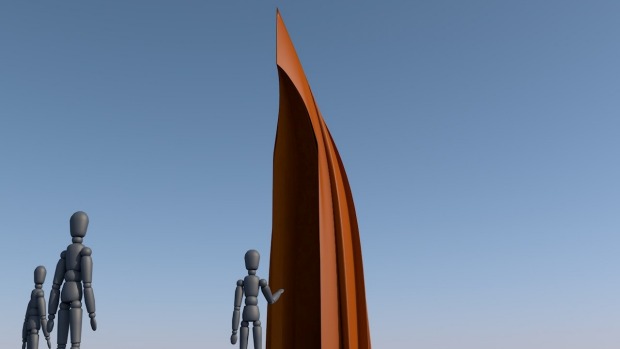 A five-metre-tall waka sculpture with links to the stars is planned for Hamilton’s riverside.

Motion sensors, LED strip lighting and surround sound would allow visitors to the Ferrybank area to interact with the steel structure.

Artist Joe Citizen is driving the partnership project and hopes to the sculpture will be in place for the 2018 appearance of the Matariki cluster of stars, around June.

Hamilton City councillors have given the tick to a Ferrybank work but haven’t yet signed off the concept for the artwork.

READ MORE:
* Dame Hilda Ross statue planned for Hamilton central
* Design brief approved for Hamilton’s Ferrybank development
* Matariki: Everything there is to know about it

The idea with the waka is to set up a situation participants can bring something to, said Citizen, a Wintec researcher and PhD candidate at Colab, AUT.

Sound and lighting will change to correspond with the time of day, and the relevant Matariki “star domain” and ideas associated with it.

“So, for instance, for something like Waipunarangi, this is about water that pools in the sky… From an environmental sensor network, that would be things like humidity, the sound of water drops, that type of thing. Those would trigger different lighting changes,” Citizen said.

A person or people approaching would be picked up through motion sensors and create further changes, within that background animation.

They may pick up an approaching person, a dog, or even the wind.

“A lot of interactive stuff is ‘if this, then that’,” Citizen said.

Physically, the waka will be made from rusted look corten steel, with a scalloped effect and lights in the recesses.

A small screen inside it will show abstract animations relating to the seven stars of Matariki, Citizen said.

The waka links to the river, is a vessel for ideas and speaks of a journey, he said.

Its creation will be a journey because the project draws on expertise from many areas.

Also involved are students and staffers in multiple disciplines at Wintec – from trades to early childhood education – and local firms Longveld, for engineering, and ACLX, for lighting.

A Boosted fund is being launched to raise $7500 to pay for steel for the project.

The artwork will be in Ferrybank Reserve, near the Waikato River and the river pathway, but its precise location has yet to be decided.

Under council’s Hamilton City River Plan, Ferrybank would be turned into the city’s premier river destination, with proposals such as interconnected terraces linking the city to the river and a destination playground.