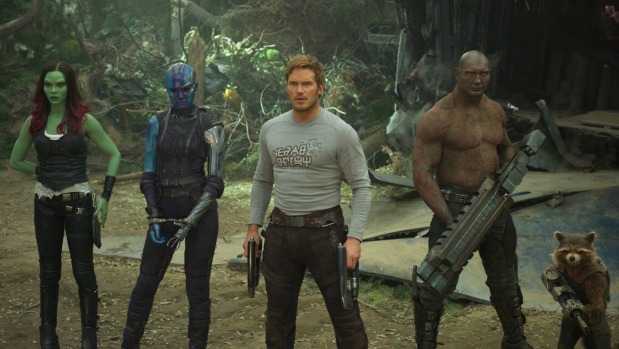 Guardians of the Galaxy 2 (M, 137 mins)
Directed by James Gunn

What’s the one bad thing about making a box office smash that blew everyone away?

Trying to come up with a sequel that will live up to some incredibly high expectations.

Clearly, Guardians of the Galaxy Vol. 2 could never match the magic of the original 2014 Marvel film. That one had the element of surprise, with writer-director James Gunn providing a fresh and fabulous take on superhero films that tended to take themselves a bit too seriously.

This time around, we all know what to expect, which is both a good thing and a bad thing. The impact isn’t quite the same, yet it’s still a hell of a lot of fun to hang out with this merry bunch of misfits. You want more witty one-liners, kick-ass 70s tunes and crazy space shenanigans? You got it – and then some.

The gang’s all here again – well, more or less, depending on how you view the unbearably cute Baby Groot (voiced by Vin Diesel) – and not much has changed. Smart-mouthed hero Peter Quill, aka Star-Lord (Chris Pratt), still has daddy issues and the hots for green assassin Gamora (Zoe Saldana), who definitely hasn’t healed the rift with bionic sister Nebula (Karen Gillan).

Rocket, the wise-ass raccoon (voiced by Bradley Cooper), is still a trigger-happy jerk, while Drax, the tactless muscle man (Dave Bautista), gets all the best lines – and an amusing new buddy named Mantis (Pom Klementieff).

The Guardians get in trouble after Rocket steals some fancy batteries they’re meant to be guarding on a planet ruled by a golden queen (Elizabeth Debicki). The angry golden gang comes after the Guardians, a mighty battle ensues, and lo and behold, Peter bumps into his long-lost daddy Ego (Kurt Russell).

The reunion doesn’t quite go as planned, but with family being a clear theme of Vol. 2, there are plenty of touching moments thrown in among all the action and wisecracks.

At times, there’s a bit too much going on, and it starts to feel like maybe we’re just being set up for Vol. 3.

But so what if we are? Fun is the name of the game here, and Vol. 2 has it in spades. So just sit back, relax and enjoy this space ride for what it is – and don’t forget to stay for the credits.