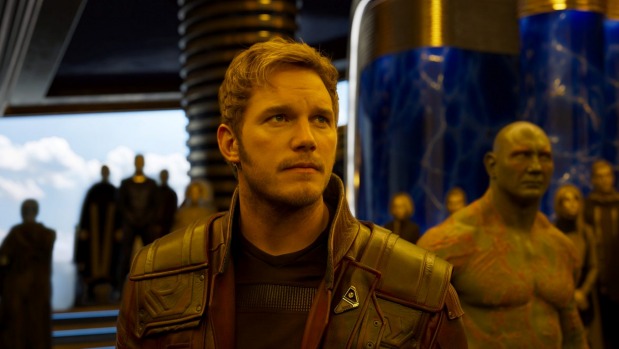 Guardians of the Galaxy (volume one) was one of my favourite films of 2014. I walked into a weekend preview screening without a clue of what I was about to watch except that it was another Marvel movie, but one aimed slightly more at kids than at adults.

About five minutes in – probably about when that beautiful, half-forgotten bass line to Redbone’s Come and Get Your Love came loping out of the speakers – a grin spread across my face that stayed there for pretty much the entire film. Guardians of the Galaxy was a blast of smart and truly funny storytelling that, for me anyway, reinvigorated the brand in a way Marvel is still benefiting from today.

The film became a global smash hit and this sequel was an inevitability.

Guardians of the Galaxy Vol. 2 picks up the action soon after the events of the first film. Our rag-tag band of heroes are back on the ship, Peter Quill aka Starlord (Chris Pratt) and Rocket the Raccoon (Bradley Cooper) are still bickering. Gamora (Zoe Saldana) is still smarting and planning revenge against her family. While Drax (Dave Bautista) is still going along with whatever the thoughts in his head truly are. Groot, of course, is just a wee twiglet, voiced – hilariously – by Vin Diesel.

After the theft of some terribly expensive batteries goes pear-shaped, via a drawn out space-chase that either pays homage to, or blatantly steals from Star Wars, the gang gets a literal divine intervention in the person of Kurt Russell, claiming to be Star Lord’s dad and channelling Kris Kristofferson in lieu of any actual acting.

From there, Guardians of the Galaxy Vol. 2 descends into a terribly over-familiar father/son reconciliation yarn, albeit one played out against a backdrop of stunning digital scenery, a couple of terrific set-piece action sequences, some Rick and Morty-level physics and a soundtrack that mines the slightly alternative side of 1970s radio hits to almost as good effect as the original.

Playing out as a side-show is the ongoing scrap between Gamora and her gone-bad sister, while an insurrection and mutiny aboard rival Yondu’s (Michael Rooker) space ship has complicated his love/hate relationship with the Guardians to a point where no one really knows who’s on which side anymore.

It’s a farrago of storylines, ancillary characters and distractions. Anyone who doesn’t clearly remember the 2014 film or hasn’t read any of the comic series might be struggling to keep up  with who all these people are and why we should even care about them.

A few very high-profile cameos take the audience’s attention even further away from whatever the end-game of these competing story-lines was ever intended to be.

In the Guardians of the Galaxy universe, everything is played for laughs. And so the film gets away with pretty much everything, just as long as we’re still laughing. But it is hard to escape the feeling, after the last joke has been cracked and Baby Groot has been deployed whenever the action is flagging, that beneath all the banter, the action, the explosions and the – truly excellent – design and artistry of Guardians 2, the script really could have been a lot more focused and streamlined than it is.

Guardians of the Galaxy 2 is obviously a hell of a good time. The audience I sat with whooped, cheered and left happy.

But for now, though I liked it, I don’t think the story-telling is a patch on the original. And, just maybe, this film coasts far more than it should on the vast goodwill we have for the first instalment. Then again, what sequel doesn’t?