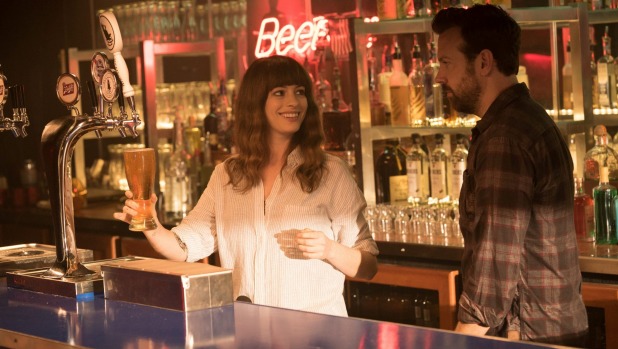 Anne Hathaway is Gloria. And Gloria is a drunk. Kicked out of her nouveau-minimalist New York City apartment by her slightly creepily over-coiffed boyfriend, Gloria decamps to her conveniently vacant childhood home upstate.

Within a day she has connected with old school friend Oscar (Jason Sudeikis), who is clearly nursing an unrequited jones for her. Oscar gives Gloria a job at his family bar. She gets drunk after work and then, while walking home, Gloria passes through an interdimensional portal, transforms into a Godzilla-type monster and wipes out half of downtown Seoul.

Nope. I didn’t see it coming either.

Colossal is one of the most intriguingly and dementedly premised films I’ve seen in ages. But, a great premise doesn’t necessarily add up to a great story. Writer/director Nacho Vigalondo (Timecrimes, Extraterrestrial), once he has established that Hathaway and Sudeikis are living parallel lives as monsters, kind of runs out of ideas as to what to do with them and Colossal becomes a less interesting film than it really should have been.

The obvious inner-demons analogy plays out fairly quickly, while the more potentially interesting satirical possibilities of the idea go largely unexplored. The result is a likeable enough film, but one that never really entrances or intrigues.

Hathaway is watchable as ever in the lead, though flawless skin and wide eyes aren’t necessarily the look I associate with anyone who drinks as much as we are told Gloria does. Next to Hathaway, the endlessly likeable Sudeikis seems miscast as the increasingly possessive and threatening Oscar.

I’m glad I saw Colossal. It’s an original and entertaining film, but one I would have liked to have seen thrashed around a lot more than it does.

In my notebook I’ve scrawled “this would make a great Spike Jonze short film”. Which sounds about right.