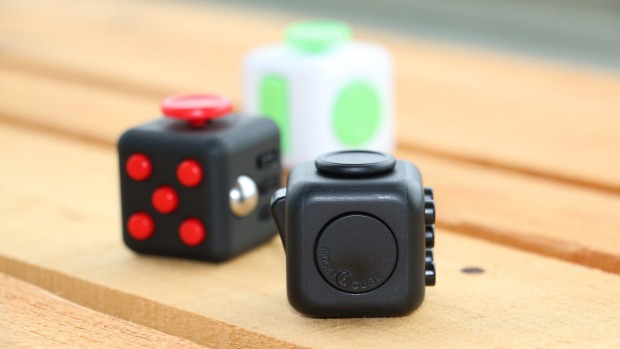 Stress balls are so last century – if you need to take your mind off life or find something to keep those fidgety hands at bay, there’s a new gadget in town.

Meet the Fidget Cube, a six-sided vinyl toy, and the Fidget Spinner, a ninja star-like toy you can spin between your fingers.

They are designed to help people manifest their fidgeting tendencies in a more discreet manner.

Thousands of people have bought them off Trade Me, and Forbes has labelled Fidget Spinners the “must have office toy for 2017”.

READ MORE: * Scientific focus goes on office fidgeting * Why fidgeting is actually good for you

Trade Me spokesman Logan Mudge said sales and searches had been “going mad”.

“The fidget revolution has hit Kiwis, we’ve seen thousands of sales and searches for the latest craze to sweep the nation (and the world).

“The fidget cube and fidget spinners weren’t even on our radar last year but since the start of the year demand has spiked.”

Mudge anticipated the craze would only get bigger, he said.

“We’ve heard that Fidget Spinners are very popular with kids and that makes sense, you can do tricks with them and they’re a lot faster paced than the Fidget Cube which is perfect for the office…

“The saying goes that ‘idle hands are the devil’s tools’ and some enterprising people have set out to give those idle hands a little more to do than click a pen, tap your foot or bite your nails.

People have searched for Fidget Cubes more than 20,000 times since January, while searches for Fidget Spinners sit at more than 30,000 for the same period.

Sales jumped 450 per cent between February and March, Mudge said.

“Combined there have been thousands of sales and we think there are lot more to come as this craze continues.

“So far this month, Fidget Spinners are the fastest rising search term on Trade Me — we’ve seen searches rocket up and they’re not slowing down.”