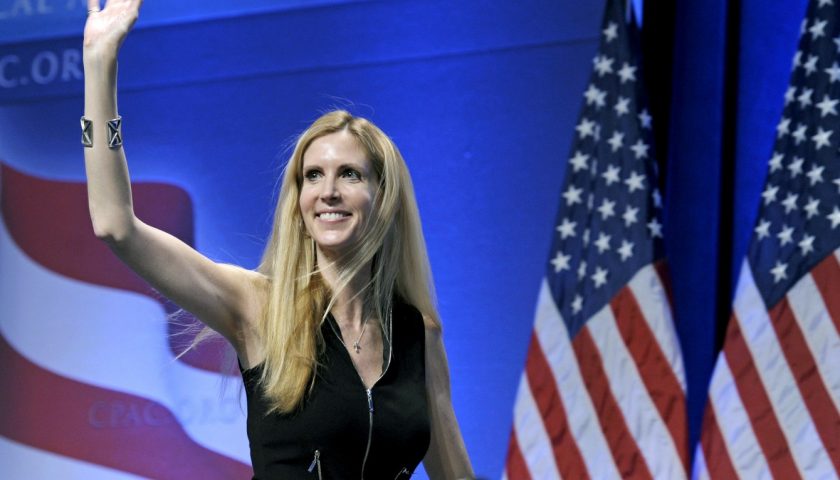 Ann Coulter described it as a “dark day for free speech”.

CONTROVERSIAL US PUNDIT Ann Coulter has said that she was forced to cancel her speaking event at the University of California, Berkeley today.

It comes amid concerns of violence by protesters who objected to her appearance at the university.

Police and university officials said they were bracing for possible trouble whether Coulter comes to campus or not, citing intelligence and online chatter by groups threatening to instigate violence.

Coulter is a hard-right, best-selling author who has been regularly accused of racism and who was a vocal supporter of Donald Trump during his campaign.

The Telegraph last year referred to her as “the Katie Hopkins of America”.

In emails to The Associated Press, Coulter confirmed that her planned speech on illegal immigration, followed by a question-answer session, was cancelled. But she remained coy about what she might do instead.

“I’m not speaking. But I’m going to be near there, so I might swing by to say hello to my supporters who have flown in from all around the country,” Coulter said in an email.

I thought I might stroll around the graveyard of the First Amendment.

The American Civil Liberties Union has come out against what it said was effectively a veto of Coulter’s right to free speech.

“The unacceptable threats of violence that have led to the ‘hecklers’ veto’ of Ann Coulter’s speech at Berkeley are inconsistent with free speech principles that protect us all from government overreach,” said the ACLU’s David Cole.

Hateful speech has consequences, particularly for people of colour, LGBTQ people, immigrants, and others who have been historically marginalised. But if the government gets to decide which speech counts as hate speech, the powers that be may later feel free to censor any speech they don’t like.

“For the future of our democracy, we must protect bigoted speech from government censorship. On college campuses, that means that the best way to combat hateful speech is through counter-speech, vigorous and creative protest, and debate, not threats of violence or censorship,” Cole added,

Officials at UC Berkeley said last week they feared renewed violence on campus if Coulter followed through with plans to speak. They cited “very specific intelligence” of threats that could endanger Coulter and students, as Berkeley becomes a platform for extremist protesters on both sides of the political spectrum.

I’m very sad about Berkeley’s cancelation, but my sadness is greater than that. It is a dark day for free speech in America.

Efforts by the university to cancel or delay the event dealt a blow to Berkeley’s image as a bastion of tolerance and free speech.

Chancellor Nicholas B. Dirks sent a letter to the campus Wednesday saying the university is committed to defending free speech but also to protecting its students.

“This is a university, not a battlefield,” Dirks said in the letter. “The university has two non-negotiable commitments, one to Free Speech the other to the safety of our campus community.”

Berkeley’s reputation as one of the country’s most liberal universities, in one of America’s most liberal cities, has made it a flashpoint for the nation’s political divisions in the era of Donald Trump.

Earlier this month, a bloody brawl broke out in downtown Berkeley at a pro-Trump protest that featured speeches by members of the white nationalist right. They clashed with a group of Trump critics who called themselves anti-fascists.

In February, violent protesters forced the cancellation of a speech by right-wing writer Milo Yiannopoulos, who like Coulter was invited by campus Republicans.

Police at Berkeley ahead of the planned visit of Milo Yiannopoulos in February.

The Berkeley College Republicans and the Young America’s Foundation, a conservative group that had helped book Coulter’s campus speaking events, both pulled their support Tuesday citing fears of violence. They blamed the university for failing to ensure protection of conservative speakers.

“Berkeley College Republicans do not want to endanger people’s lives so because of the university’s unwillingness to do their job we are forced to cancel the event,” Troy Worden, president of the campus Republicans, said Wednesday.

“You will see a high number of highly visible law enforcement. We’re going to have a very, very low tolerance for any violence,” he told a news conference. He said Berkeley police had reached out to local and state police forces “to let them know we might be calling for assistance.”

– With reporting by Rónán Duffy