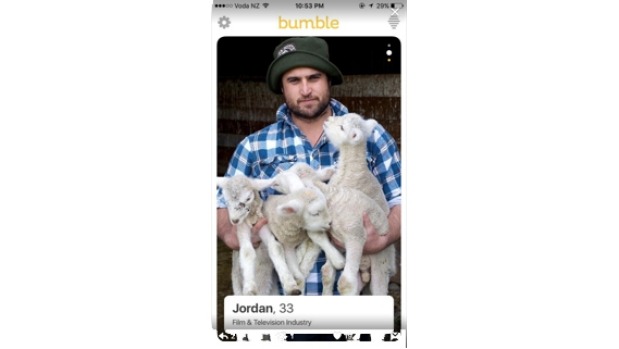 Former bachelor Jordan Mauger says he’s been used as catfish bait after screenshots​ emerged purporting to show his profile on a dating app.

Back in 2016, Mauger appeared on The Bachelor New Zealand season two. Only days after the season finale aired, victorious bachelorette​ Fleur Verhoeven​ announced Mauger had ended their relationship.

On Wednesday, screenshots from the dating app Bumble – where women must select men before they can talk to them – appeared to show Mauger was a member. The profile correctly stated Mauger was a 33-year-old employed in the film industry and showed him holding four lambs while wearing a bucket hat.

Mauger said it was fake and he wasn’t surprised.

READ MORE:
* Full Bachelor coverage
* Bachelor contracts threaten $30,000 penalties if contestants speak out
* What ever happened to the ex-Bachelorettes?

He said he was long gone from dating apps. His Tinder account lasted about a year, he said. He made the Tinder profile when he was 29. Then he appeared on The Bachelor, a further attempt to find love after the apps failed, he joked.

According to Mauger, friends had shown him quite a few screenshots of his apparent dating app profiles.

The lamb photo was “a classic” he said.

“They’ve gone for the cuddles, loving animals, I can see why they’ve used that one.”

Anyone looking for a date with Mauger should avoid swiping right, he said. He preferred real life interaction these days.

In December, Mauger told Woman’s Day he had found love with US-based, Kiwi-born DJ Gina Middleton. “My feelings for her are just incomparable to anything else,” Mauger told the magazine. “It’s amazing. So I guess things happen for a reason!”

As for the random person using his face and fame to talk to women on Bumble, Mauger told Stuff it was “quite flattering really”.

“But if they had read the media about me they should’ve probably gone the other one…. I’m bad news mate,” he said.