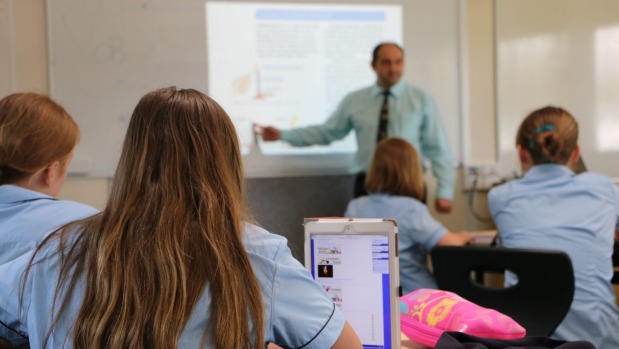 Teachers could pay more than double the registration fee after completing postgraduate study if Education Council proposals are adopted.

The professional organisation for teachers opened consultation on plans to increase the fee from $73 to $170 a year on Monday.

The first increase since 2010 would keep the council afloat when $21 million of government funding runs out in 2019.

Education unions say the council, which has no elected membership, “does not represent teachers” and opposed funding anything more than its core functions: professional ethics and discipline.

It coincided with another proposal to require future teachers to gain a postgraduate qualification to “raise the status of the profession”, Education Council chief executive Dr Graham Stoop told parliament last week.

A statement from the council said the required skills for teaching were “more consistent” with postgraduate-level study.

“The Education Council wants to further explore the implications of such a goal for different parts of the sector.”

Post Primary Teachers’ Association (PPTA) president Jack Boyle said the “huge” fee hike made it likely the Government would retract funding for them.

The postgraduate plan could exacerbate a nationwide teacher shortage, he said.

Government figures suggest up to 1400 more secondary school teachers alone would be needed each of the next eight years as the teaching population ages.

“A major reason for the shortages is that teaching is just not desirable compared with the other opportunities available for people with good degrees . . . the pay is nowhere near enough to compensate for the huge workloads and the daily stresses of managing today’s teenagers,” Boyle said.

“Early childhood teachers do not earn massive amounts of money. They are highly vulnerable in terms of pay and conditions of work compared with teachers in schools.

“We knew that this was coming but it is the size of the increases that teachers and the early childhood sector cannot accept.”

The Education Council said it was “cognisant” of those concerns and planned to consult the sector next month.