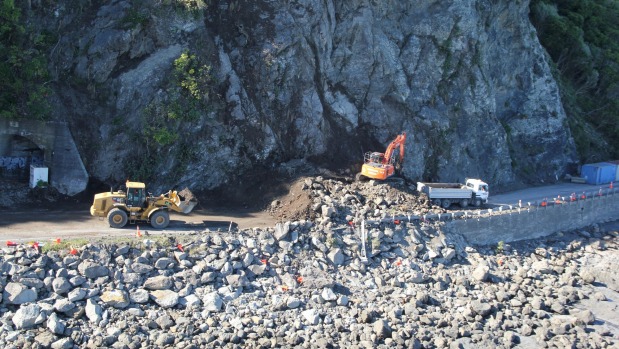 Kaikoura resident Dr Amy Scott-Milne wants to see text alerts rolled out to cut through the confusion about when the town’s fragile road links are open and shut.

A Facebook page for Kaikoura residents was often inundated with questions about the state of State Highway 1, south of the town, and the Inland Rd.

Scott-Milne said she saw how effective a text system could be when she lived in Rangiora, and the local council sent out texts about the old Ashley River bridge.

The North Canterbury Transport Infrastructure Recovery alliance used a text service for residents in Oaro and Goose Bay, south of Kaikoura, over the weekend.

About 60 people who signed up at a community meeting three weeks ago received texts telling them they could use SH1 to get to Kaikoura on Sunday, a day before it officially re-opened to the public.

“The advantage with the text message is that it it can get a message through when cell reception is down to one bar – something email often will not do,” she said.

The alliance also published updates and a weekly bulletin to subscribers, and NZTA offered roading updates on their website and on social media, Wright said.

A North Canterbury business owner also backed calls for a text system, saying it would help him get the right information to people passing through his cafe to Kaikoura.

Kerry Henderson, the owner of Fossil Point Cafe in the Greta Valley, said when SH1 was closed south of Kaikoura his business was on the biggest cul-de-sac in the country.

People were still trying to get to Kaikoura without checking if the road was closed. If key businesses along the route got a text they could tell them not to waste their time, Henderson said.

NZTA already had a text-alert system in place for truck drivers using the alternative route between Picton and Christchurch, Wright said.

“Any highway delays or closures along that route are text messaged to freight operators,” she said.

The service, run by Fulton Hogan on behalf of NZTA, was set up shortly after the earthquake last November. So far, more than 100 people had signed up.

Wright said Fulton Hogan ran another service for NZTA for highways on the West Coast and through the Lewis Pass and Arthur’s Pass, which had been in place for several years.

Those signed up to the service included emergency services, freight companies, and regular commuters, she said.