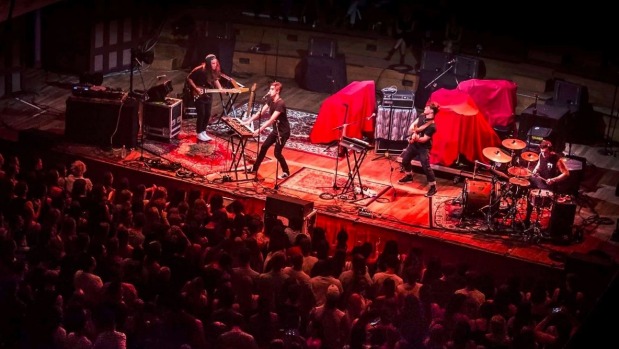 Fresh from their first overseas stint, Drax Project are back in Wellington,   giving punters a chance to be part of the band’s history.

Their  shows  on April 13 and 15  will be recorded and released as   live sets, and will include snapshots of the early, dirty covers of pop and hip hop tracks that helped gain the group notoriety as buskers.

Drax Project, named for a portmanteau of drums and sax, has a recorded output characterised by catchy pop hooks, lush production, and a polished musicality derived from the members’ deep interest in music.

The Easter shows at Caroline, come at the end of a busy summer with the band fresh off a successful main stage set at Homegrown as well as opening two shows for Six60 in Australia.

“Since we met those dudes, I’ve written more tunes in a month than I did in almost two years.”

Singh said  the focus of the shows will be on the covers that earned them their first fans, when they played as buskers and bar musicians.

It will be the first time these covers will be recorded for release and the EP of the Easter shows will be produced by their live mixer, to make the recording as faithful a capture of the show as possible.

The band are aiming at international audiences, and are aware of the challenge that comes with having to compete for ears with every other band on the internet.

On the other hand, there’s no other time in history it’s been as easy for local bands to be heard globally, Singh said.

Bands have become famous overnight from things as incidental as a meme (for the record, Singh found Bag Raiders through the ‘Shooting Stars’ memes, and thinks the band are dope).

He’s glad that being known mostly in Wellington has given the band time and space to develop their ideas and sound before they tackle the tough international circuit.

“We’ve been in Wellington for three, four years, but in terms of the international scene no one knows who we are, which is cool for me because I want to play overseas, so it’s kinda nice to have our working process local.”