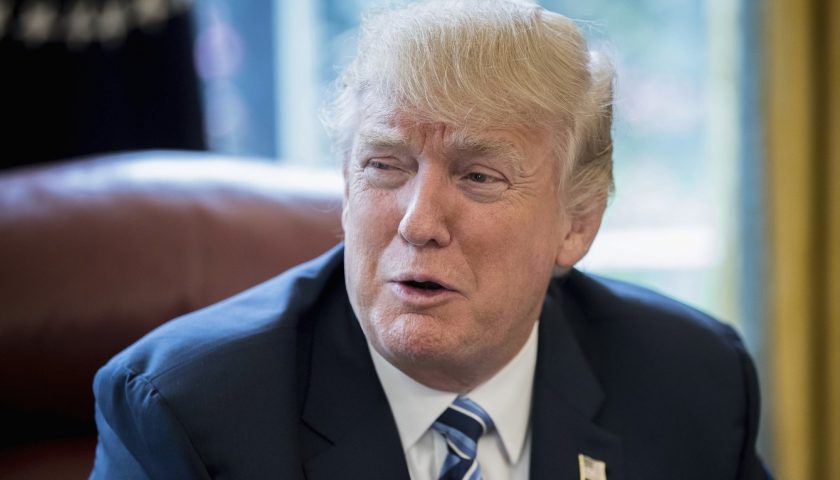 The US President insists that the wall will be built, however.

DONALD TRUMP AND US lawmakers inched closer to a deal last night avoiding a government shutdown, as the president, eager to showcase a win marking his first 100 days, retreated from a demand to fund a border wall.

With the government set to exhaust its current funding at midnight Friday, the White House is under the gun to craft a compromise that would keep the government running while not appearing to cave on Trump’s demand that Congress fund a wall on the border with Mexico.

“Hopefully, we’ll reach an agreement some time in the next couple of days,” Senate Majority Leader Mitch McConnell said, but he did not rule out passing a short-term extension that gives lawmakers time to craft a final deal.

While lawmaker said the funding legislation would steer clear of including funding for a border wall, it is expected to cover broader border security measures, such as the use of drones or anti-tunnelling technology.

But a deal remained far from certain.

Among the sticking points is the fate of cost-sharing arrangements that help reduce health insurance costs for low-income Americans buying plans through the Affordable Care Act, the reform implemented by Trump’s predecessor Barack Obama.

Trump had been on a collision course with lawmakers over the wall, demanding that Congress include funding to start construction in its new spending bill.

Democrats blasted the approach, warning that Republicans risked being blamed for shuttering the government barely three months into Trump’s administration.

“There aren’t enough Republican votes to put the wall in” to the spending bill, said veteran Senator Patrick Leahy, top Democrat on the Appropriations Committee.

With jitters rippling through Washington, Trump apparently agreed to soften his demand days before the deadline.

US President Donald Trump speaks at the Treasury Department in Washington.

He told a group of conservative journalists he was open to delaying funding for the wall’s construction until September, a White House official said, according to The Washington Post.

By yesterday, the administration was acknowledging Trump’s plan could be pushed back.

“Building that wall and having it funded remains an important priority to him,” advisor Kellyanne Conway told Fox News.

But we also know that that can happen later this year and into next year.

US President Donald Trump speaks at the Treasury Department in Washington.

With shutdown fever appearing to break in Washington, top Senate Democrat Chuck Schumer said he was “optimistic” about reaching a timely deal, provided Republicans do not include controversial other issues such as defunding Planned Parenthood clinics.

Instead of a wall, lawmakers are expressing support for a broader set of border security measures, including using drones and other high technology.

“We are opposed to the wall. And we’re not going to allow any dollars in any kind of border security appropriation to be used for a wall. Period.”

Building the wall was Trump’s signature campaign promise, but Democrats note that Trump pledged Mexico would pay for it.

Even as the White House appeared to soften its rigid posture, Trump sent mixed messages.

The president then insisted the wall would be built “soon,” but offered no time frame other than within his four-year term.

“The wall’s going to get built, folks,” Trump told reporters.

Congress, returning from a two-week break, now has three days to strike a deal.

Lawmakers have warned that a stopgap measure, known as a continuing resolution, may be needed to give Congress breathing room to finalise the spending details.

With the 100-day mark landing on Saturday and few legislative victories under his belt, Trump is pressing to fulfill another campaign pledge.

As a candidate, he repeatedly vowed to reform the tax code and slash the corporate tax rate from 35% to 15%

An announcement on such reforms is due today.

Conservatives have sought a reduction in tax rates for years, but they are also adamant about reducing the debt. Some Republicans appeared hesitant to embrace such slashes to  corporate tax rates.

If there are no significant tax breaks for small business or working-class Americans, “that would certainly for me be a non-starter,” Democratic Senator Debbie Stabenow said.