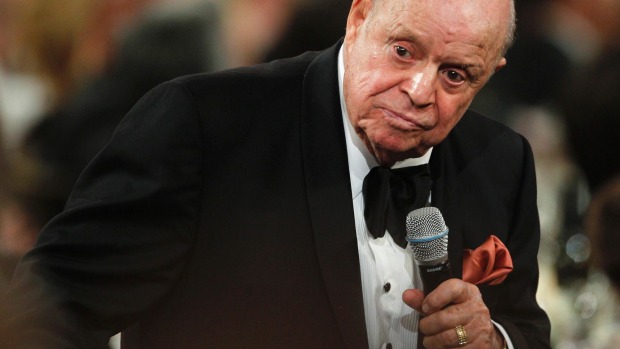 US stand-up comedian Don Rickles, who died on Thursday at the age of 90, was legendary for his onstage insults – even though he was a nice guy in real life.

Though most of the humour was in his curmudgeonly delivery, Rickles would dare to say things others never would.

At a tribute to Clint Eastwood he landed one of his most famous, often imitated jabs:  “I just gotta say what’s on everybody’s mind here tonight – You’re a terrible actor.”

Rickles had starring roles in film and television across both comedy and drama through an almost 70 year career in entertainment. But he’s probably best known to current audiences as the voice of Mr Potato Head in all four of the Toy Story films.

So here are a few of his most pointed, most scathing and most hilarious put downs:

READ MORE: Stand-up comedian Don Rickles has passed away at the age of 90 from kidney failure

On Robert De Niro, while shooting Casino: “They warned me what a serious guy De Niro is …They warned me not to make jokes. So the third day of shooting, I looked him straight in the face and told him: ‘I can’t work with you. You can’t act.’ The guy fell on the floor. He didn’t stop laughing for 18 weeks. Scorsese fell on the floor too, but he’s so small we couldn’t find him.”

On Martin Scorcese, who directed him in Casino: “Marty … somebody get a phone book so you can see me. Forty million jobs in show business, I got a midget to direct me.”

While roasting Bob Hope on The Dean Martin Celebrity Roast: “We kid about great stars such as you Bob, why? Because you’re old and washed up.”

To Frank Sinatra, while performing at a club in 1957: “Make yourself at home, Frank. Hit somebody.”

To Johnny Carson, during his first appearance on The Tonight Show in 1965: “Hi, dum dum … Where does it say you butt in, dummy? I’m fed up with you already, you know that?”

He continued: “That’s it, laugh it up. You’re making $50 million a year and your poor parents are back in Nebraska eating locusts for dinner.”

To Mr. T on the Merv Griffin Show: “I gotta tell you, with all the nonsense and all the jokes, I want to tell you from the bottom of my heart: Merv Griffin told me he never liked you.”

To Larry King on Larry King Live in 1985: “Well I just wanted to say to you, Larry, as a favour, please don’t call me anymore. I think this was an absolute waste. This will not change my life one bit. I personally feel your show is not going to make it much longer, really.

“You’re an annoying guy sitting there in your little funny little sweater every night, leaning over, pressing, you’re like a beaver, you’re trying to snarl and get information. Larry, go back to Miami and do what you do best – suck up a swamp. Don’t bother people, Larry.”

To Ronald Reagan at his second inauguration: “Remember when you were governor and you used to walk over to my table? Now you’re big and you’re getting on my nerves?”

To Questlove while appearing on The Tonight Show With Jimmy Fallon in 2015: “I spoke to the barber convention and they need you badly. But you’re a hell of a musician, good luck to you.” Then, to Fallon: “He’s not that good.”