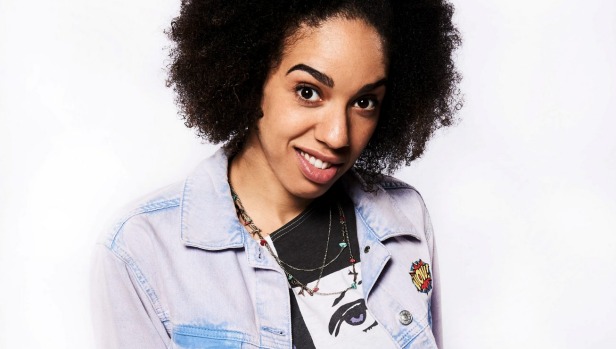 When new Doctor Who star Pearl Mackie went searching for a suitable costume for her character, she never dreamed she’d stumble on something so poignant.

The 29-year-old British actress, who plays new “companion” Bill Potts in the latest series of the long-running UK sci-fi show, says she was out just over a year ago with costume designer Hayley Nebauer when they spied a purple denim jacket and a Prince t-shirt.

“We attached all the patches to the jacket and the combination kind of said Bill to me,”  the effervescent Mackie explains down the phoneline from the UK.  “We didn’t think much about the t-shirt at the time but the initial trailer aired quite close to Prince’s death [on April 21 last year], so it was all a bit strange. It feels like quite a nice sort of homage though – even if it was accidental.”

A lot has happened for Mackie since then. She is just finishing up work on the 12-episodes that make up this season – just over 200 shooting days in total. Aside from the 12-hour days, special effects and draining action scenes, the South Londoner of West Indian and English descent has had to cope with the announcement of the departure of both current showrunner Steven Moffat and her “Doctor” Peter Capaldi and the Twitter storm that followed the news that her character was gay.

Describing the past year as “pretty insane”, Mackie says she doesn’t know that she could have prepared herself in any way for the public interest that surrounds Doctor Who.

“I guess, in a way, I’m just trying to not take myself too seriously and just kind of enjoy the ride.”

So did the now three-season veteran Capaldi offer her any advice?

“When we first started, he gave me like a little card and a candle for my new flat in Cardiff and just said that ‘the whole whirlwind of Doctor Who can be a bit mad. There’s so many other parts that go along with just making the show, but just remember that making the show is what we are here to do. You are a really good actress. Just focus on that and the rest will come naturally. But if it doesn’t, here’s my number and if you need to ask me anything, you can’.

“I thought that was really nice, but typical of the man. He’s amazing – a very generous actor. He always makes sure we rehearse things fully and double-checks that everything is all right for me. He’s really enthusiastic too.”

Mackie admits that prior to working on the show, she’d never been to Cardiff before, or seen much of the show.

“It wasn’t really on when I was a kid. Obviously, I was aware of  Doctor Who, I think you would have to be living underground to not be, but after watching some of the first series back with Christopher Eccleston and Billy Piper when I was about 16, I’ve only seen bits and bobs.

“When I first auditioned, I asked Steven if he wanted me to look at the ‘back catalogue’ and he went, ‘well, actually, what you are doing is working, so I think it’s probably best not to go back’.”

Mackie says while they had some discussions about the character of Bill, she was pretty much all there on the page. “However, Steven does do this great thing. As you kind of get to know each other and he spends time with you, he puts little bits of you into the character. I remember saying something in the audition about how I have to try hard to keep my face as still as possible in TV auditions because it just moves by itself. That made its way into the show. I remember reading it going, ‘I swear I said that’. I think that’s quite fun – it attaches it to a bit to you and makes it completely individual.”

Saying that parts of Bill definitely come from her, Mackie believes one of the great things about working on Doctor Who is that you don’t know, even as an actor on it, what’s going to happen next. “It’s like your day-to-day life. You discover things as you go along. That, for me, has been really exciting.”

As for the toughest challenge of making the show? Mackie says it has been keeping herself going throughout the nine-month shoot. “You do get really tired and exhausted – even though it is such an exciting job. Giving it your all in every scene is not something I’m used to. With theatre, you’ve rehearsed it all and then all you do is keep going and find new things within the course of the play. With this, I’ve learned so much about how to act on camera, because I’d hardly had any experience with that before.”

She does admit though, that despite all the action and drama, it’s the surreal moments that have stuck with her.

“You actually don’t realise how scary some of the monsters are until they are right there in your face and you are trying to battle them. But then you’ll be sitting there at 7.30am, chatting to a half-dressed Ice Warrior who has latex on his face, but also jogging bottoms on. Working on this show is such a brilliant, mad experience.”

Doctor Who’s latest season debuts on Prime at 7.30pm on Monday, April 17. Subsequent episodes will air on Sundays at 7.30pm.