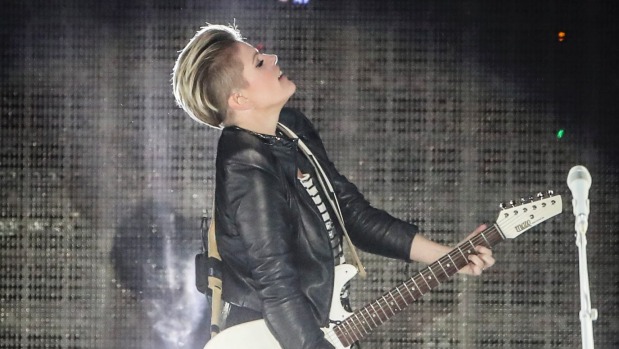 REVIEW: The Dixie Chicks didn’t need to say they were ashamed of their President at Mission Estate, it was implicit.

The penultimate song of their set, ‘Not Ready to Make Nice’, written in the wake of the bitter fallout of their criticism of then-US president George W Bush in the early 2000s, was the show’s centrepiece.

They then told the audience “we can’t leave you angry,” and closed the set with with ‘Better Way’.

Fourteen years ago, America was at war in the Middle East and the Dixie Chicks were at war with Bush’s America.

They had gone from from sweethearts to pariahs after saying they were against the war and ashamed the president was from Texas.

But the Dixie Chicks are in no danger of another fall like 2003. They’re doing fine without Trump’s America – they’re back on their own terms and nothing they say to the 25,000 fans at Mission Estate can hurt them.

We know what we’re getting – voices with more edge than a Kiwi sav, good times, sass, ringing harmonies, bluegrass-steeped virtuosity and soul that transcends borders.

“Can’t wait,” said fan Su Costa ahead of the show. “I went to their 2006 Not ready to Make Nice concert in Shepherds Bush [London]. Looking forward to shouting ‘Goodbye Earl’ again, this time with the help of my daughter!”

In support, Kiwi singer Kaylee Bell sounded and looked the part to the point where she wouldn’t be out of place playing a rising pop country star on TV’s Nashville.

Lyrics like “there’s no escape from the heartbreak” mine country music’s major theme. Synths, rock beats and a square-jawed lead guitarist complete the deal. Hands off, Jeff Fordham and evil Edgehill records.

A marriage proposal plays to the family atmosphere. Good luck Benji McTaggart, we didn’t hear if she said yes, but any which way things go, there’s a country song in it.

Next, Morgan Evans, an Aussie trying his luck in Nashville, does his magic trick with a loop pedal making one guy with a guitar sound like a band.

“My job is to warm you up,” he says, and people are warmed up enough to sing along to songs they don’t know.

His groove is more rock than country, and when he straps on a telecaster with a band behind him he shows there’s a world between one bloke with a guitar and a pedal and a rock band.

He’s eager to please to a fault, and by the time he warms over ‘Dragon’s Rain’ and AC/DC’s ‘Highway to Hell’, I’m singing along too.

‘Avalanche City’ starts off cheerful and strummy, some whistling even.

He bravely enters frailer territory, spare guitar and piano, as many join booze queues and pre-load for Dixie Chicks, while others discuss life, love and devastation to his open-hearted backdrop.

As night falls, Dixie Chicks open with ‘Taking the Long Way’, the story of their road back from Ashamed-of-Bush-gate in a song title.

They tell us we look wasted, we look fantastic. We’re definitely wasted.

“This place is horrible,” they say ironically. Even at their most charming, they’re messing with you.

They don’t give Trump special oxygen, referencing him in an introduction to a cover of the sixties protest song ‘Something in the Air’, and he appears on the video screen during their paean to premeditated murder, ‘Goodbye Earle’.

They didn’t explicitly say they were ashamed of Trump. Perhaps he’s not even worth it.

Bringing it down to a more intimate setting, they bring out the microtonal queerness of slide guitars, play their Beyonce comeback song ‘Daddy Lessons’, and bluegrass up a medley featuring the hooks from Beyonce’s ‘Single Ladies’ and White Stripes’ ‘Seven Nation Army’.

‘Landslide’ is the emotional highlight, with lead singer Natalie Maines saying she identified with the line “I’m getting older too” when they covered the Fleetwood Mac song in the early 2000s, when she was 25.

More than a decade on, we’re getting older too.