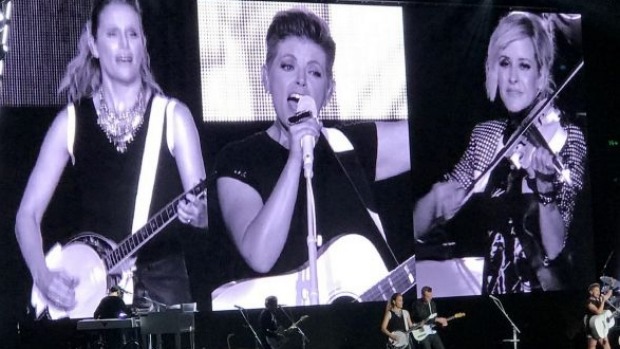 Fourteen years ago, America was at war in the Middle East and the Dixie Chicks were at war with George W Bush’s America.

They had gone from from sweethearts to pariahs after saying they were against the war and ashamed the president was from Texas.

But the Dixie Chicks are in no danger of another fall like 2003. They’re doing fine without Trump’s America – they’re back on their own terms and nothing they say to the 25,000 fans at Mission Estate can hurt them.

We know what we’re getting – voices with more edge than a Kiwi Sav, good times, sass, ringing harmonies, bluegrass-steeped virtuosity and soul that transcends borders.

“Can’t wait,” said fan Sue Costa ahead of the show.

“I went to their 2006 Not Ready To Make Nice concert in Shepherd’s Bush [London]. Looking forward to shouting Goodbye Earl again, this time with the help of my daughter!”

When the trio kicked off their DCX MMXVI World Tour in Cincinnati last June, they performed in front of a giant backdrop that showed an image of Trump with devil horns and a comical moustache and goatee.

Then during a Brisbane concert last month, Maines took a swipe at the conservative side of American politics.

The band brought a cardboard cutout of American radio host Howard Stern’s limousine driver and bodyguard, the foul-mouthed Ronnie Mund out on stage.

“He (flat Ronnie, standing on stage during the second half of the show) makes us feel good – keeps an eye on things, kind of like our own Donald Trump,” she told the sell-out Australian crowd.

“Make Brisbane great again. Personally, I never thought it lost its greatness, but apparently it has to be great again.”

Concertgoers can expect more of the same when the band take the stage around at around 7pm. The weather forecast is mainly fine with a bit of cloud, with a low overnight temperature of 8 degrees.

The Dixie Chicks’ popularity has remained undimmed over nearly two decades, winning 13 Grammy Awards and collaborating with everyone from Beyonce to James Taylor.