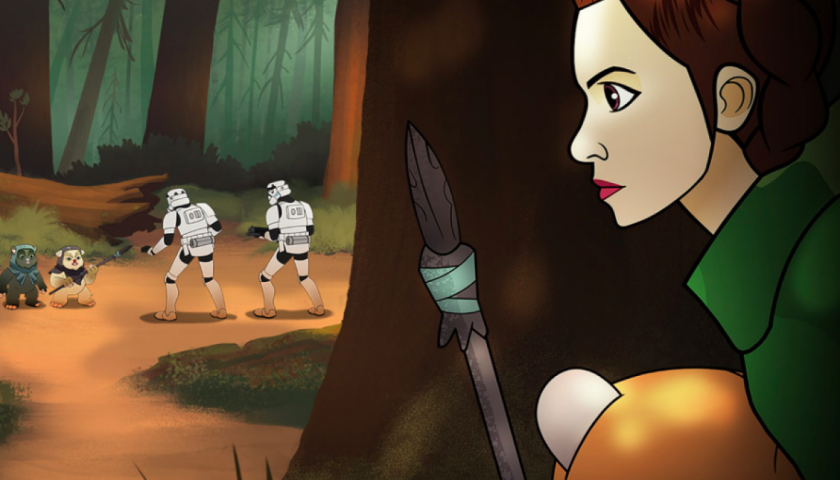 What a difference a year and a half can make. In the lead-up to Star Wars: The Force Awakens, fans launched the hashtag #WheresRey to question the lack of merchandise featuring the film’s main character. In the time since then, Disney, it seems, has taken note, with a commitment to female representation that has led to the announcement of Star Wars Forces of Destiny, an initiative that includes an animated micro-series and a new line of dolls, books, and other merchandise, all dedicated to fan-favorite—and notably, female—characters.

Entertainment Weekly has more details about what we can expect from some of the specific shorts, which will first appear on YouTube, with a two-part television special with additional shorts set to follow on Disney Channel this fall. Rey’s short will take place aboard the Millennium Falcon, with Han Solo, Chewbacca, and Finn all appearing, and, in a bridge between the movies and television shows, Hera Syndulla and Princess Leia will team up for what looks like an Ewok-involved mission.

The animated series, which is penned by Jen Muro, already looks and sounds great, and the involvement of Carrie Beck, part of Lucasfilm’s story team, and Filoni, a driving force behind the excellent Clone Wars and Rebels, is very promising. But animation has already long been a home for diverse, interesting female Star Wars characters in a way that, frustratingly, has not translated into the live-action movies, which tend to put one woman at the center of the action and then call it day. (Before an army of disgruntled male fans swoop in to argue how unfairly female-dominant the franchise has become, a quick reminder that there have been seven Star Wars movies with a male lead, with potentially another three on the way. Rey may be The Force Awakens’ main character, but Rogue One is the first and so far only film in the franchise to give top billing to a woman.)

The most exciting part of this news is an accompanying new line of dolls, or, as Disney is hilariously rebranding them, “adventure figures.” The dolls are not limited to the franchise’s female characters and will also include Luke Skywalker, Yoda, and others, but prominently featuring Leia, Rey, Sabine, and Jyn as part of this announcement is a careful calculation on Disney’s part. The company has previously had a shaky track record on this front—the new figures are a sign that fans have been heard and a reminder of Lucasfilm’s commitment to include more women in Star Wars, both in front of and behind the camera.

Sure, putting these characters at the forefront right now could be cynically dismissed as a cash grab, but so what? Disney is a business, and if it thinks betting on women is a good investment, then that’s a win. And if popularizing some lesser-known female characters brings us even a step closer to a Rosario Dawson-Ashoka Tano movie, I, for one, am on board.