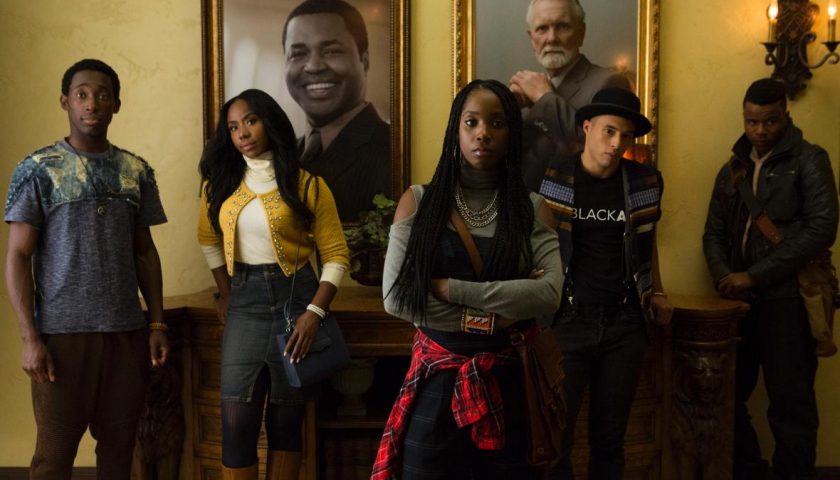 The problem with Dear White People, the movie, was unwittingly summed up by the character Gabe, secret white boyfriend of the righteous, Afrocentric Sam (Tessa Thompson), after the classroom screening of her provocative silent film “Rebirth of a Nation.” (It depicted the racist outcry to Obama’s election and used actors in whiteface.) “It’s a little self-congratulatory, light on story, and, frankly, thematically dubious,” Gabe declared. As I wrote in my review of Justin Simien’s 2014 feature debut, while the newcomer clearly had a sharp point-of-view and an inspired aesthetic (Spike Lee-meets-Wes Anderson), his ability to craft a compelling, coherent narrative was wanting. There were too many storylines competing for your attention—the film follows four black students, each dealing with their own personal neuroses at the fictional, predominantly white institution Winchester University, plus a few other wayward subplots—and characters spewed overly clever dialogue at one another in a way that felt more pedagogic than engaging.

Three years later, Simien has returned to Winchester U. with many of the same characters (most now played by different actors), many of the same plotlines, and the same penchant for speechifying dialogue. And yet Dear White People, Netflix’s new 10-episode series adaptation, works infinitely better on almost every level than its predecessor—and it does so precisely because it gets to unfurl as a 10-episode series, rather than as an overstuffed under-two-hours feature. Given plenty of time to flesh out the relationships and backgrounds of each of its core protagonists, Simien and his other collaborators, including Moonlight director Barry Jenkins and Funny or Die writer Leann Bowen, are able to build upon the theme of campus racial tensions in much more layered and calculated ways.

There is a ton of plot in Dear White People, but the way in which itplays fast and loose with storytelling devices makes that plot both easily digestible and entertaining to watch. Each of the first five episodes reintroduces a familiar character from the film: biracial Sam White (played here with crackling precision by Logan Browning), host of the controversial campus radio show that shares the franchise’s title; handsome hunk Troy Fairbanks (Brandon P. Bell, reprising his role), the well-meaning but often ignorant son of the dean; outsider Lionel (DeRon Horton), a writer on the school newspaper who is coming to terms with his sexuality and his place within the black community on campus; Coco (Antoinette Robertson), ambitious but insecure, obsessed with getting her MRS degree; and Reggie (Marque Richardson, also reprising his role from the film), Sam’s partner in radical activism who faces a harrowing experience that propels the narrative forward.

Their stories overlap via flashback and in the present day, as scenes are revisited from different points of view, particularly the climactic Do the Right Thing-inspired protest against the blackface-themed costume party from the film. (That scene, including some of the dialogue, is recreated here with the new actors replacing the original ones.) Yet the Halloween party is only the entry point for Dear White People’s exploration of race on campus—as we’ll soon see, that event was just the fuse, the Buggin’ Out-yelling-that-there-are-no brothers-on-the-wall moment, not the trashcan through the window. As Troy laments to Lionel in a later episode as tensions mount at the school, “Is it bad that I long for the days of the blackface party? … At least then we could all agree on something.”

For all of the weighted subject matter the show covers in just 20-30 minute increments—including colorism, the sexual fetishization of black people, police brutality, white ally-ship (Gabe, played here by John Patrick Amedori, has a much bigger and more crucial role in the series, and even gets his own POV episode in the back half of the season), and the internal politics of the elite American educational-industrial complex—Dear White People also bubbles with a lightness and sharp wit that was often missing from the film. Giancarlo Esposito provides the voice of narrator, divulging informative and sometimes saucy commentary and insight into the characters’ inner workings and early beginnings in a way that never feels too distracting. The dynamic between Sam and her best friend, Joelle (Ashley Blaine Featherson), feels warm and lived-in from the very first episode, whether they’re cracking wise about ridiculous diets or planning the next student protest. And moments like when Reggie’s friends kid him for his borderline hotep tendencies demonstrate a show that isn’t afraid to get a little silly and self-critical.

Not everything works. A spoken-word piece Reggie performs about being black in America encompasses everything terrible about spoken-word—as Issa Rae once put it, “Rap and poetry had a baby named spoken-word. I wish I could abort that baby”—but presents it without irony. (Incredibly, Sam likens Reggie’s basic, ostensibly derivative poem to Langston Hughes, James Baldwin, and Frank Ocean.) And a token African side character—if they ever specify what country he’s actually from, they breeze right past it—might rub viewers the wrong way, since he mainly exists to be on the receiving end of his black American classmates’ foreign-related jokes.

But it seems safe to say that if you liked Simien’s debut, you’ll appreciate how much more deeply Dear White People goes; even more so, perhaps, if you found the film as disappointing as I did. As for those “#boycottNetflix” trolls who saw the title, maybe watched the trailer, and decided that Simien is a “racist” and the streaming giant is, too, for releasing such a show—those people could never be reached anyway. As with Sam’s radio show, Dear White People doesn’t hold out hope that certain white people will suddenly “get it”—it just demands its right to speak its truth, with tongue planted firmly in cheek and fist raised defiantly in the sky.