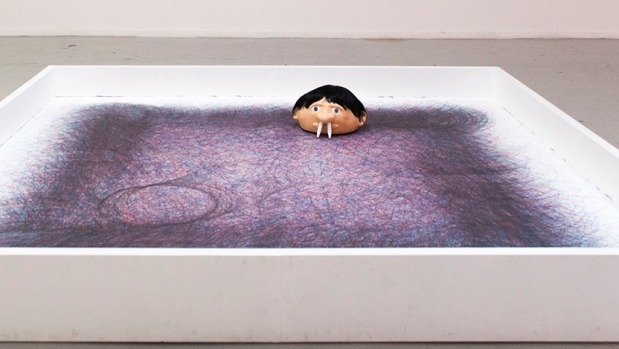 It came as a complete surprise – a substantial survey exhibition of a favourite and internationally renowned British artist. David Shrigley:Lose Your Mind opened at Christchurch’s CoCA gallery in early March.

Described in the gallery’s media release as the “wildly popular British artist”, it does sound like hyperbole, but it is no exaggeration.

Shrigley’s art is popular and accessible, and is also respected and acclaimed by the serious art world.  He was nominated as a Turner prize finalist in 2013 and more recently commissioned to complete a public work for the prestigious Fourth Plinth in London’s Trafalgar Square.

The artist made a 10-metre high sculpture of a hand giving a thumbs up (it could be Shrigley publicly announcing his pleasure at receiving the commission), titled Really Good.

Without intentionally seeking to do so, he has given the cartoon a presence and status in the fine arts that it has never previously held.   English cartoonist James Gillray (1757 – 1815) produced satirical political cartoons about the folly and strange nature of human behaviour which are arguably the closest in any forerunner to Shrigley’s. But then, early in his career, Shrigley tried his hand at political cartoons and has commented that it’s not something that he is hugely proud of.

Moreover, although he is working within familiar traditions of cartooning (works on paper in acrylic and ink), the ideas and propositions of his drawings and sculptures are more universal and incisive in their observations on the complex nature of human behaviour than any social or political commentary.

David Shrigley: Lose Your Mind mixes large-scale drawings and cartoons with the artist’s sculptures and installations.  Taken as a series of works diverse in their subjects (insects, eggs, gates, death and a headless ostrich), the shifts in scale and use of different materials make it unsurprising that he sees Lose Your Mind as “like a group exhibition rather than a solo show”.

Shrigley is a conceptual artist whose practice happens to be grounded in drawing and cartoons.  Death Gates,an opened gateway assumedly leading towards death, has a kind of school-boy heavy metal ambience and humour to it, but making the decision to pass through the entrance, from one gallery to the next in Lose Your Mind, is still not an entirely comfortable experience.

Shrigley acknowledges his interest in, and respect for, conceptual artist, Marcel Duchamp, as well as the Dada-inspired biomorphic wire and found-object constructions of   Jean Tinguely.

Shrigley’s Insects feels as though it has been animated by the weirdness, humour and profundity of Tinguely’s kinetic sculptures, and he has cited the moment in which he saw a survey of the artist’s work as a child as decisive in his commitment to becoming an artist.

Shrigley also comments that Insects is atypical of his work.

However, like the majority of his comments about Lose Your Mind, he is matter-of-fact about this work’s genesis and its purpose.

“Insects was made for a context, an exhibition in Barcelona, and I had been told by a friend that the art handlers there can’t be trusted.

“I had been working with ceramics and I had all this metal junk around the studio and used that to make the insects. It was painted on site by the staff in Barcelona.

“People see me as an illustrator so there is no evolution in my drawing.  I began making the sculptural works as a sculpture of my drawings.”

Yet the content of these sculptures are not just connected to a history of cartooning.

Cheers, a half-figure (legs and trousers) oozing pink foam, has the appearance of a kind of Loony Tunes accident, yet the presence of this body in the space of the gallery cannot help but raise questions about the before to the decapitated figure’s after.  Funny, yet awkward and uncomfortable, or as Shrigley says, “I like the idea of telling stories”.

He is similarly deadpan about the re-contexturalising of his art as merchandise, away from the space of the art gallery.

His exhibitions are accompanied by a line of merchandising products with reproductions of his work on them – mugs, pencils and even socks.

“I make a lot of merchandise with my work and this is through the Danish company Tiger, a sort of middle-class version of the $2 Shop.   I can do anything with my work.  The important question is, is it a good pair of cuff links or not?”

In The Artist, a group of four large-scale abstract drawings dominated by overlapping circular forms and colours, on first encounter appear as an impressive body of work, only to be compromised and belittled by a model of the artist’s head (made from a vacuum cleaner), moving around randomly on the gallery floor with crayons up its nose, turning out another large-scale drawing for the same series.

It is laugh-out- loud funny but also, like most of Shrigley’s art, reduces its subject to comic absurdity.

He explains the work pragmatically.  “I made this piece because I had an idea. It was a way of making a big abstract artwork. When it was first shown, the drawings were all in a line at the entrance to the exhibition and then, at the end of them, you meet this guy, looking stupid and daft.

“‘For 25 years now I have been doing this, so I am a serious artist.   Not academic or astute, but examining ideas through the making of work.

“I do not consciously think about my career.  I do not see myself as a major fine artist rather a footnote.   My interest is always in the next thing.’