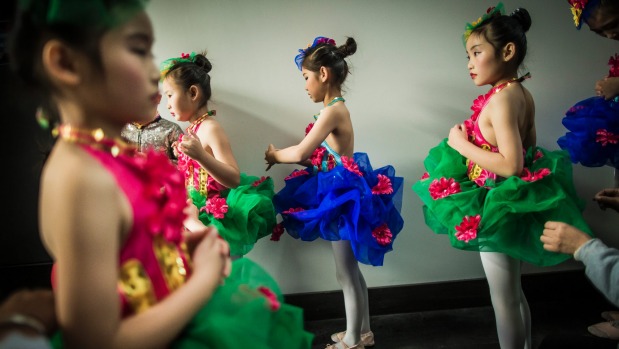 Behind the feathers and jewels, the peacock dancers are freezing.

“Wellington is very beautiful but very cold. We will all be warm soon when we dance,” their leader smiles.

The event, titled That’s Us, was hosted by the Multicultural Council of Wellington to encourage people to stand up to racism and celebrate diversity.

Race Relations Commissioner ​Dame Susan Devoy was scheduled to make an appearance ahead of Wellington Mayor Justin Lester between the exotic performances.

“People are very excited when they see us in our costumes. They say we look like birds,” Velautham said.

Velautham​ was a solo performer at last year’s event and had such a good time bought the Vehaara​ Arts Dance Group back for more.

The peacock dancers took the stage after children from the Oriental Cultural and Performing Arts Group performed to the 200-strong crowd.

South Island visitors, Kaia Armstrong, 15, and Rosie McAllister, 13, said Wellington was already a multicultural city and they were delighted to help celebrate the diversity.

They had dined on “the best” traditional Mexican food while watching the performances, Armstrong said.

“The peacocks were definitely our favourites, they were amazing.”