Relatives and hundreds of members of the Irish community attended the month’s mind mass.

Addressing the congregation, Mitchell said he had first met McGuinness in 1995 when he was asked to travel to Northern Ireland as President Clinton’s representative.

Over the past two decades, he said, “much has been written and said about how Northern Ireland moved from war to peace”.

The Prime Ministers and Taoisigh who presided over the peace process deserved credit for the progress, he said.

At great risk to themselves and to their families, he said, “at a critical moment in their people’s history they summoned the courage and vision to end a conflict that some historians trace back over 800 years”.

Martin was one of them. He had courage and he had vision.

There was no doubt his leadership had been a major factor in reaching the Good Friday and other agreements, and in maintaining the peace that followed, the former Maine senator said.

The iconic images of the former Deputy First Minister working alongside his former foe Ian Paisley and the photos of him meeting the Queen ”graphically represent the massive transformations that occurred in Northern Ireland,” he said.

In a lighter moment, he joked that the negotiations took so long to complete because “it took me one year to understand what anybody was saying – and only then did we get down to business”. 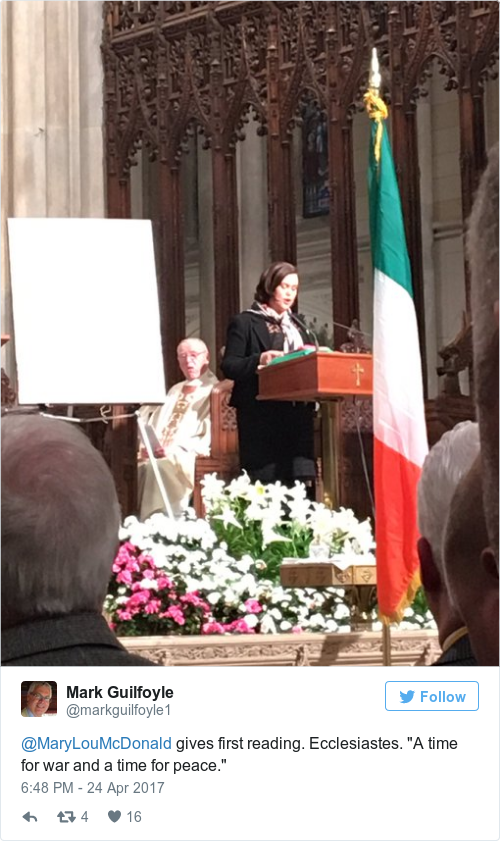 @MaryLouMcDonald gives first reading. Ecclesiastes. “A time for war and a time for peace.” pic.twitter.com/i7tzPlpP5V

Large photos of McGuinness were displayed on the altar for the ceremony, which was presided over by Monsignor Robert Ritchie, the cathedral’s rector. Consul General of Ireland Barbara Jones was among the congregation.

A month’s mind mass will also be held in Derry tomorrow evening.