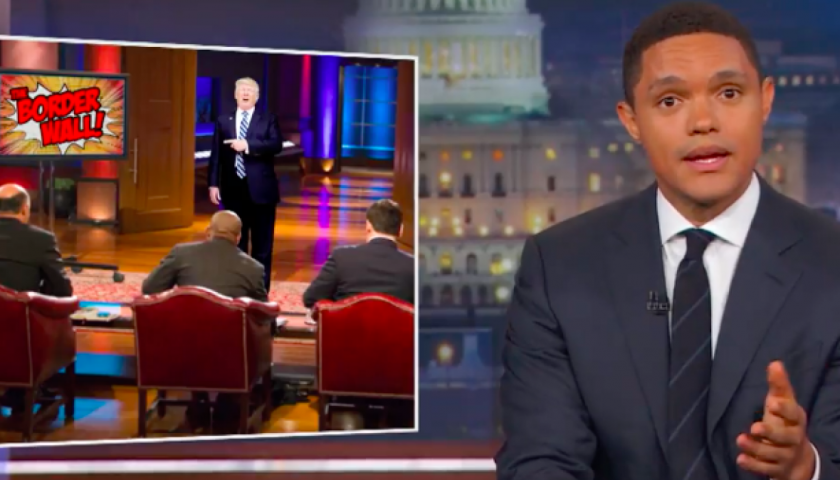 We’re now more than 100 days into a Donald Trump presidency, but Trevor Noah feels like we’re still living in the age of Trump the candidate. Trump marked his 100-day milestone (you know, the one he doesn’t care about) with a rally in Harrisburg, PA in which he promised to make America great again, attacked CNN, and pointed out one of the only black people in the crowd—so, basically the same stuff he used to do before he was president. “He points out black people in his crowd like he’s on a whale-watching tour,” said Noah, imitating Trump: “Look, a black one! It’s so majestic! All right, Jeff Sessions, ready the harpoon.”

Trump also had some reassurances for supporters about his proposed wall along the Mexican border, even though Congress just passed a budget that does not allocate a penny toward building it. Trump told the crowd not to worry about the wall’s construction, instead urging them to go to sleep, “like the world’s laziest hypnotist.” Since neither Mexico nor Congress wants to pay for the wall, Noah had some other suggestions for funding it, like Kickstarter or Shark Tank. “Which would be really humiliating, because then he’d have to ask for money from real billionaires.”

Of course, it wouldn’t be a Trump rally without the president attacking the media, which he did, taunting them for his absence at the annual White House Correspondents Dinner, where a large group of “Hollywood actors and Washington media are consoling each other in a hotel ballroom in our nation’s capital right now.”

The Daily Show’s Hasan Minhaj, who headlined the dinner, had something to say about that, bragging that his speech forced the president to resign in tears and pants-splitting humiliation. Noah had to be the one to tell Minhaj that, uh, none of that happened.