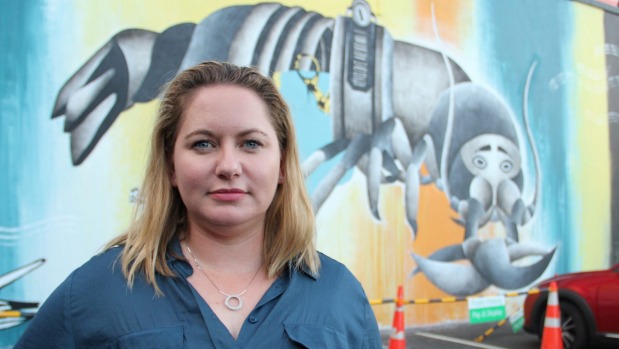 A mural of a giant disemboweled crayfish has sparked debate over the polite boundaries of public art on Auckland’s North Shore.

Queenstown-based street artist Tess Sheerin painted a large crayfish mural on the side of the Bruce Mason Centre in Takapuna, on Auckland’s North Shore, earlier this month.

The Takapuna artwork is one of a series of outdoor pieces Sheerin has produced across New Zealand for her “pollution awareness mural tour”.

She approached the Bruce Mason Centre’s body corporate, and its managers Regional Facilities Auckland, to get consent to produce the mural – totally at her own expense.

However, a number of local politicians are unhappy neither they nor local residents were consulted before the mural was produced.

“There is a new mural on the Bruce Mason Centre that is particularly ghastly, gross, whatever words you’d like to use,” Devonport-Takapuna Local Board member Jennifer McKenzie said in an April 11 local board meeting.

“I’m actually really frustrated and unimpressed by this, not because I’m anti street art, but it’s actually quite a confrontational piece of artwork. There was no public consultation and no consultation to the board, and of course it’s also on the main street of Takapuna.”

In a later interview, McKenzie said that she does support the environmental message behind Sheerin’s mural, but has doubts how clearly the mural conveys that message.

The mural depicts a cartoon crayfish having its body unscrewed to reveal a pile of garbage it has presumably consumed in the polluted ocean. It is set back from the road and faces onto a Wilson’s car park.

Artist Tess Sheerin said she personally received only positive feedback about her Takapuna mural while painting it.

“I would love to have the support from the [local board] members there and I hope they understand where I’ve come from, and that the public shows them how much support I’ve really had. Even if it’s not everyone’s cup of tea, the style of it,” Sheerin said.

“But that’s art, and they should want to embrace all different types of artworks.”

A quick survey of the public passing the crayfish mural on Hurstmere Rd, Takapuna, found a majority were unfazed by the mural’s subject matter.

“I don’t have a problem with it. I think it’s better than a blank wall with drips running down it. So, yeah, it’s fine,” Brown’s Bay resident Hannah Barraclough said.

“Inoffensive to me and I’m not too clear what it is but it’s neither here nor there for me,” Newmarket resident Sam Hallam said.

“If you ask too many people’s opinions, you’ll never do anything. So, that fact I don’t like it doesn’t really matter, because some people will,” Albany resident Elaine Christy said.

“I mean in South Auckland you wouldn’t have this problem. There are enough things going on in South Auckland, issues, and you look at this place making such a major issue about this, it’s amazing,” Mangere Bridge resident Brent Watt said

Auckland Live director Robbie Macrae was involved in approving artist Tess Sheerin’s request to paint the mural, and said part of the role of public art is to generate debate.

“We are always happy to talk to local boards about any issues,” Macrae said.

“It’s in a street art form and it’s more interesting than a big advertising billboard.”

Macrae also said the mural was temporary, although there is no set time frame for how long it will remain on the Bruce Mason Centre.

Yet, Devonport-Takapuna Local Board chair Grant Gillon echoed the concerns of McKenzie.

“There’s been a lot of criticism of the subject matter,” Gillon said.

“But it’s always really difficult to comment on the artistic merit of something that’s gone ahead because it doesn’t matter what, they’ll be debate either way that will probably never get resolved.”

“All around the world, murals have been used to either display some ideal or portray conflict, or just beautify an ugly area, and I think it’s developing worldwide acceptance and love for murals. But normally we would have liked to have some feedback from the public first.”

Auckland Council senior local board advisor Tristan Coulson said, at the April 11 local board meeting, he appreciated member McKenzie’s concerns, stating he was unsure how the mural contributes to “placemaking” in the region.

However, Coulson confirmed all the correct processes and procedures were followed to get approval to paint the mural.

A poll on Neighbourly.co.nz of 78 votes had 79 per cent of the public believing the mural should stay.

However, only 26 per cent of people believed it should stay because of its artistic merit.