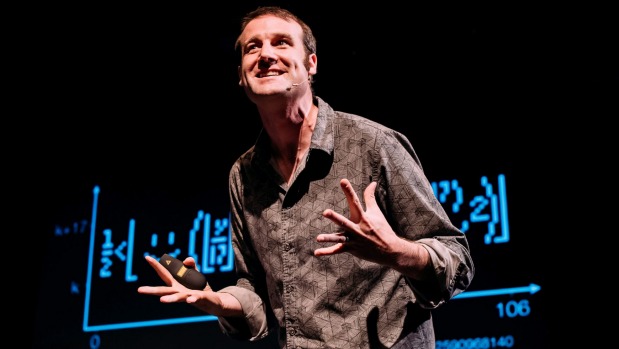 In a world where science and facts seem to be increasingly regarded as nuisances to the powerful, a variety show that strives to educate and entertain is always welcome.

I had initially misread the promotional poster as Comic Shambles, but while there was plenty of mirth during this unusual blend of science experiments, stand-up comedy and musical interludes, there were plenty of serious and sobering findings for the appreciative audience too.Cosmic Shambles is the brainchild of Robin Ince, a nerdy UK comedian who has appeared on a number of TV shows, using his wit to popularise science and rationalism. He was an able and genial compere, stitching together the diverse range of acts with gentle banter about popular perceptions of science. The science was itself a good balance of the frivolous (what do ghosts eat?), the genuinely frightening (we seem to be heading for some kind of antibiotic Armageddon as bacteria become ever more resistant) and the ability of science to make something fascinating out of the seemingly trivially mundane: why do Aussies and Kiwis walk on the left, while their counterparts in the northern hemisphere walk on the right?

This is the first time the show has ventured to these shores, and this was underlined with the inclusion of local comic talent such as James Nokise, whose trenchant gags offered both light relief and a mordant observation of the times. It was a suitable contrast to some of the more worrying revelations of the evening.

My youthful co-attendee pronounced the whole evening “amazing”; he was particularly impressed by mathematician Matt Parker’s quirky attempt to measure the number pi using pies and a special pi-endulum. New Zealand scientist Michelle Dickinson, a.k.a. Nanogirl, added a local flavour with an exuberant and thought-provoking presentation.

Although the musical performances were high-quality – Shihad’s Jon Toogood produced a charming solo acoustic cameo – they did feel a little unconnected to the rest of the show. Considering that the whole gig weighed in at over three hours, the late finish and occasional colourful language might have deterred some parents from bringing along their inquisitive young charges.

This was nonetheless a compelling evening of fun and fascination, which will provide plenty of family table talking points for some time to come.