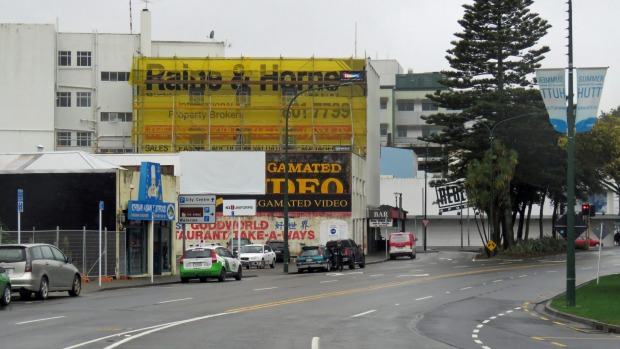 A prominent piece of “commercial graffiti” on a prominent Lower Hutt building will finally be covered up.

The Raine & Horne Real Estate advertising sign has greeted travellers coming into the town’s southern entrance for the last 30 years, as it sits on the side of a building on Laings Rd.

Drivers coming around the two roundabouts on Queens Dr will soon be looking on new artwork by Wellington artist David Brown.

Deputy mayor David Bassett was pleased the advertisement would finally be gone, calling it “commercial graffiti” in its current state.

“It’s amazing how long it’s lasted there. We thought it would be taken down by now.”

Scaffolding has gone up around the sign in preparation for painting to begin around Easter, depending on the weather.

The artwork will be called Catchment. Working on the sign will prove a challenge for Brown, as he paints 9 metres off the ground on a canvas 18m long and 8m high.

His usual work uses natural and man-made structures like fences or rivers control how people and animals move through their environment.

Using shapes and colours, he’ll be exploring this theme in Catchment using shapes from and around the advertising sign. Six prominent windows on the side of the Laings Rd building will be incorporated into Brown’s piece.

The full piece of art will be unveiled in early May.

Covering up the slogan is part of a Hutt City council initiative called Making Places to make the CBD more attractive to businesses and residents by 2030.

Lower Hutt Mayor Ray Wallace said surrounding building owners had been very supportive of the move to cover up the ad.

“It is time for the old sign, now more than 30 years old, to go and a more vibrant image to take its place. We are proud of the work we have planned in the Making Places strategy to liven up and develop the CBD and this is one part of it.”