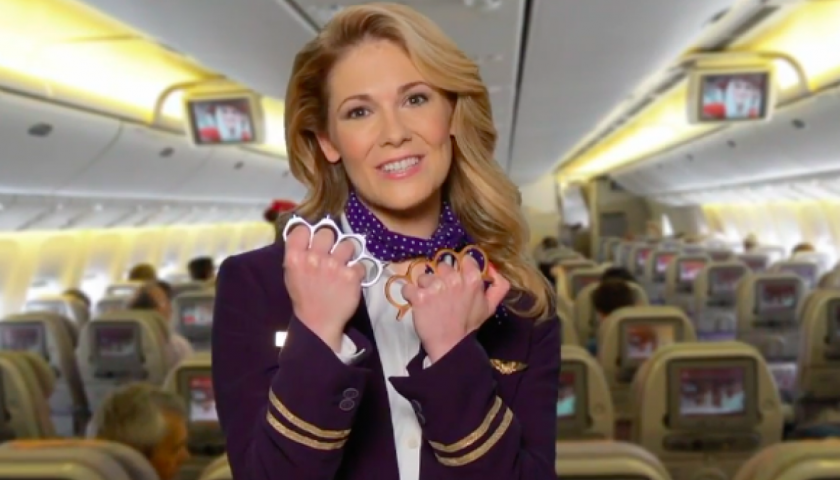 United Airlines has finally issued an actual apology for the instantly infamous video that circulated earlier this week in which a paying customer was forcibly dragged by police from his seat to make room for an employee. But the damage was already done, with the brand now synonymous with “being physically and violently ejected from somewhere for no real reason”—something comedians and late-night hosts were quick to seize on.

Jimmy Kimmel has hit the airline the hardest, first with a monologue Monday that questioned why airlines are even allowed to overbook when, for example, stadiums, never do. He even included a faux commercial for United that featured a flight attendant wearing brass knuckles and proposed the alternate slogan, “Fuck you.”

Kimmel returned to the controversy on Tuesday to add that even Pepsi wouldn’t want to be United right now. United was also the butt of a joke about Donald Trump’s astronomical travel budget. “The president’s trips to Florida every weekend have already cost more than $20 million of taxpayer money. See, this is the guy we need United to drag off the plane.”

Ellen DeGeneres got in a dig at United’s last controversy, in which teenage girls were reportedly denied boarding on a flight for wearing leggings: “I think United didn’t want people to wear yoga pants because there’s nothing to grab on to.”

She then threatened to boot one of her own audience members before offering some pretty straightforward advice for the airline: “Don’t overbook your flights.”

Conan O’Brien took the opposite approach, pretending that he doesn’t get enough audience members at times and sometimes has to drag people in off the street to make them attend. This one may have come a little too soon.