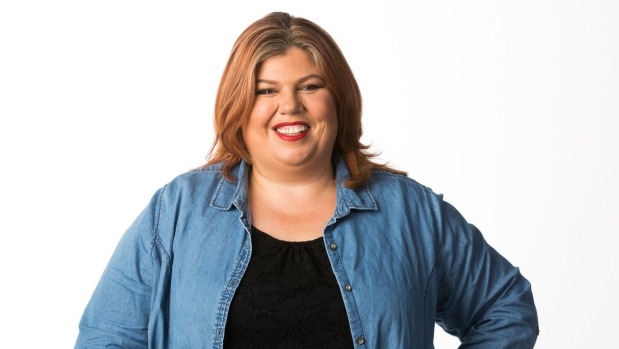 “I thought I was going to pass out, I was so scared,” she says of the first time she appeared at the New Zealand International Comedy Festival.

“When I walked out on stage and took the microphone in my hand, all I could think was, ‘Everyone should be able to hear my heart’. It was so loud.

“I just looked out at the audience. It was such a sea of faces, and then I saw Jeremy Corbett smiling at me and I thought, ‘I’ll be all right’ but **** I was scared.”

Four years later, Urzila is again appearing at the comedy festival but this time she is hosting Three’s coverage of the event, The Comedy Gala, which will screen on two consecutive Fridays.

With a line-up that includes Ed Byrne, Aunty Donna, Abandoman and Zoe Lyons among others, it is a huge achievement for the former graphic artist who launched her comedy career in 2008 after immigrating to New Zealand from South Africa.

A regular on the stand-up circuit both here and in Australia, she is also frequently the only woman on Three’s 7 Days. Carlson has won the NZ Comedy Guild’s Award for best female comedian five years in a row and – after that gut-wrenching debut – has twice been voted the winner of the people’s choice award at the comedy festival.

“It’s probably the most stressful night of the year (for the comedians),” she says of the gala night.

“Backstage, there’s two groups of people – the very relaxed ones that have done it and are so relieved and then there’s ones that are just pacing up and down the hall, scared witless because they still have to do it.

“Then you’ve got all the managers walking up and down looking petrified like they’re sending their kids off to school for the first time.”

Carlson says she still can’t quite believe her fast rise as a comedian, something she wasn’t even aware was a job nine years ago.

“I thought comedians were sort of the funny people at the barbecue and then every now and again someone gave them a microphone,” she says. “I didn’t think you could make a career out of it and, to be honest, I’d never even been to a stand-up comedy show until the first time I did one, so it was something I was completely unaware of.

“Two people at work egged me on to do it and they booked me in and I just went along with it in response to peer pressure.”

The rest, as they say, is history.

Carlson now routinely performs to audiences ranging from 80 to 2800 and frequently appears on television in both Australia and New Zealand.

She is often the butt of her own jokes and draws heavily on her own life – and that of her wife and two children – for her routines.

“I’ll take stuff that’s in my life but I’ll make it better. Like if I’m taking my dog to kennels, I’ll be thinking what could be the funniest thing that would happen while I’m there. Then I get a story out of that. It’s like creative writing from high school that I apply to my life.”

It does make people a little wary of her though, she says.

“Even yesterday on a flight, the air hostess gave me coffee and said, ‘I’d better be careful, I don’t want to end up in one of your jokes’.

“It’s not that simple. Something massive has to happen in that moment for it to become a joke.”

However, what is no joke for Carlson is her success.

“Every time still, when I’m standing in front of an audience, I go ‘Really?’.

“I’m always blown away that people would come,” Carlson says. “Even when they asked me ‘Would you host the gala?’, I thought they were just taking the **** really.

“I’m absolutely blown away. It’s all been a bit of a blur.”