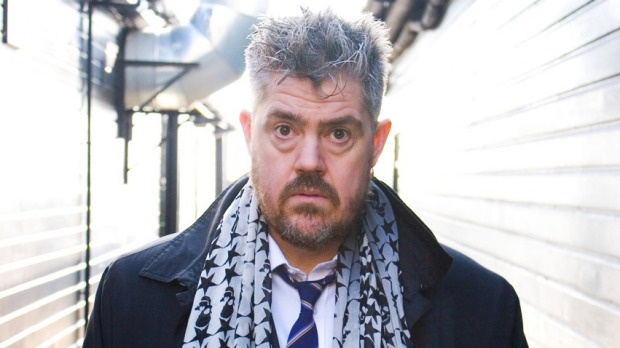 Comedy. What is it really? Just an excuse for funny-looking people to become the centre of attention.

“Fortunately, comedy is about what you’re saying, not what you look like,” concedes English comedian Phill Jupitus, who just got off the train in Yorkshire after travelling down from his “second home” in Edinburgh.

“It’s not about beauty or fashion; it’s about ideas. That’s why you get such a diverse range of physical freak-shows like me doing stand up.”

Jupitus is, admittedly, a mountain of a man. A very funny mountain, however.

“Like, I was a fat bloke, so I talked about being a fat bloke. It’s a forum where you talk about your own truth. It was the same with punk. Some people just liked the trousers and the haircuts, but what was at the heart of punk was a bunch of bold new ideas. Same with stand up. Very rarely is it haircut-and-trousers based.”

Jupitus is heading this way for an Auckland show in May. He will, thank God, be wearing trousers. But he will be letting it all hang out when it comes to ideas.

His new Juplicity show promises “adult themes, childishly delivered”. Like a long line of confessional comics before him, he will ransack his personal life for our amusement.

“There’s some stuff about my daughters in there, and a lot about how I was raised, because I was kind of a quirky kid. I talk about my mum, too, because she was a pretty unconventional woman. It’s largely about my world, and how that world has shifted in the last year or two. Believe me, there’s never any shortage of stuff to talk about.”

Indeed. Jupitus, who was born Phillip Swann, is a professional blatherer. On stage and screen, on radio, via podcast, in musicals and plays, his voice has been ringing out now since the mid 80s. Back then, he called himself Porky The Poet.

Inspired by ranting punk rhymers Attila The Stockbroker and John Cooper Clarke, Jupitus left a deadly dull career staffing a London Job Centre to go on tour, opening shows for The Housemartins, Style Council, Billy Bragg, Madness and The Who.

“Really, they hired me because I was cheap and portable. It’s such an easy support act, because there’s no sound check, no instruments, and a poet’s unlikely to drink all your rider, unless he’s particularly problematic. And we don’t need a van. With Billy Bragg, I travelled in the same car, as another passenger!”

Jupitus got steady work, but after one gig in 1986, James Brown, the former editor of Loaded magazine, hit him with a hard but useful truth.

“We were sitting around drinking cider, and he told me that the bits I said between my poems were a lot funnier than the poems themselves. My poems were s…, in other words, but bless him for saying it in such a delicate way. So I started phasing out Porky The Poet, and by 1988, I was doing pure stand-up.”

Jupitus has since carved out a lucrative multimedia niche for himself, presenting breakfast radio for the BBC, acting in stage plays and pantos, leading teams on high-rating TV talk shows such as QI and Never Mind The Buzzcocks.

A rough-and-ready sort of a singer, he can sometimes be found bashing out cockney-funk classics Reasons To Be Cheerful, Sex And Drugs And Rock’n’Roll, and Hit Me With Your Rhythm Stick with splendid UK band The Blockheads, having sporadically stepped in as frontman following the death of his mate, Ian Dury, in 2000.

“Actually, I’ve got so many other things on the go that stand-up sometimes doesn’t get a look in. I just spent 18 months playing The Baron in Chitty Chitty Bang Bang. So coming back to stand-up is something I’m really looking forward to.”

Yes, and I imagine the pay packet’s attractive, too, given that stand-up is big business in the UK these days. One-off shows by the nation’s most hilarious command similar-sized audiences to big rock acts. Mid-range comedians with any TV exposure tour the country, packing out theatres.

Comics who started their careers in cold little rooms above pubs, reeling off jokes to 15 punters and a resident Alsatian at under-attended comedy clubs are now coining it. Why does Jupitus think live comedy has become such a huge drawcard in recent years?

“Because it’s fun, mostly, but also because you’re doing something your audience cannot do. What the punters most admire is brain speed. You might be talking about something they have experienced, but you have the skill to take it somewhere funny faster than they could themselves.”

“That’s what people are paying for. Every time you do a show, you’re getting that little bit sharper and faster. Your timing’s getting better and you’re becoming a better improviser. And everything else you’ve done feeds into that. The fact that I used to do poetry means I play with rhythms a bit more. I spent five years acting and doing musicals, and those things also affect how I perform stand up.”

“Really, I have rough ideas and then sharpen them up, live on stage. TV panel shows are great for your improv skills, too. Half the time, you don’t know where an idea comes from. It just falls out of your head, man! And the more you do it, the better you get at that.”

In the early days, before all his other career strands kicked in, Jupitus spent years getting “match fit” on the London comedy club circuit.

“It really honed my reflexes. I’d go on stage feeling bulletproof. There’s a real confidence that comes with performing so often that nothing can faze you- not hecklers, not forgetting your train of thought, nothing! You just open your mouth and good ideas fall out, fully formed. You become completely fearless. I love that.”

It is a career that suits his personality, he says. Jupitus has no time for that old “sad clown” chestnut people wheel out, the idea that inside every ranting extrovert comic lies a sensitive, damaged, often somewhat depressed introvert trying desperately to be liked by as many people as possible.

“I think that’s bollocks, really. Any human being has some misery in there somewhere, whether they’re a comedian or not. The main uniting factor with comedians is just that they’ve got a different energy level to other people. By which I mean- it’s really low. To come up with good material, we have to weeks on end doing absolutely nothing. We just sit, binge-watching box sets, watching Netflix or YouTube, to put our brains into a state of near deadness. You have to get yourself really, properly bored, you know? And then suddenly- bang! A great idea comes! But in that first stage, it’s a really hard sell, convincing your family you’re actually working.”

The comedian’s other key skill, he reckons, is learning to manage adrenaline, especially in TV work.

“You have to be able to sit back and not be too needy. If you’re just hyper-alert, waiting to tell a joke, you will be crap. You need to empty your mind and just listen to what everyone else is saying and respond to that. New people come on those shows and they say, look, write me a few jokes, and I say, no. You’re a naturally funny person; that’s why we hired you. Don’t just try and wheel out bits of your act, because it’s always really obvious. Just trust yourself and let the funny flow out.”

Jupitus will be letting the funny flow out in Auckland in just over a week’s time. It might even be his last gig, he reckons.

“I’ve never been to New Zealand before, and it occurred to me just now that I may not go there ever again. After all, live comedy is a potentially life-threatening occupation for a fat bloke like me. Imagine how much strain it puts on your heart! Let’s not sugar coat things. I’m 54 years old and I weigh 300 pounds. Anything could happen. My opening night in New Zealand could also be my closing night in New Zealand. One gig, then goodbye, that’s it!”