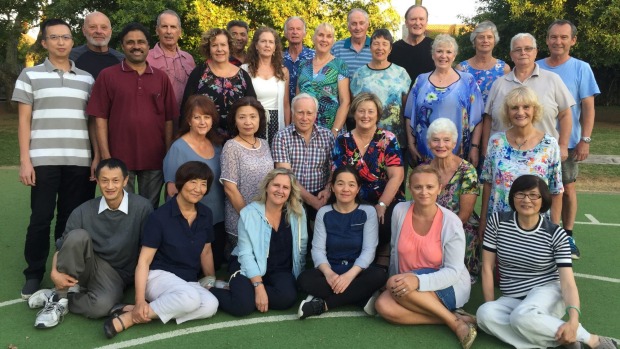 It’s the rehearsals for East Auckland-based choir, the City of Auckland Singers, which has its 45th anniversary in September.

They’re young professionals and retired grandparents from different backgrounds, with a shared passion for singing and entertaining.

“It’s a lovely, friendly group,” Julia Banks says, who joined the choir with her husband Trevor in 1994.

With a focus on popular music, their wide-ranged repertoire includes classics by The Beatles, and also modern hits of artists such as Adele (Laurie Blue Adkins) and Christina Aguilera​.

To better communicate with audiences and express themselves, the group usually sings without holding music sheets and with body movements.

Other than singing locally – with recent performances including Christmas songs at Howick’s Midnight Madness event and at Sky City – the City of Auckland Singers have also travelled to Italy, Australia and Wales to showcase their talents.

Previously known as the Harmonaires when first established, then named after one of the founding members and now accompanist and conductor Bruce Murray as the Bruce Murray Singers since 1980, the group decided on the new name before performing in Italy in 2011.

“We want to have a name reflecting where we come from and who we’re representing,” musical director Sue Murray says, who is Bruce’s wife and joined the group in 1974.

The decades have seen the choir expand from 16 singers to the current 30.

“Everybody needs something in life that feeds their souls. If you’ve got something that feeds you, I think that makes you better able to give to others,” Murray says.

“Our biggest achievement is that we’re still going and that we keep getting better. We’ll keep on looking for opportunities to sing at exciting places.”

Lyn Stevens joined the group in 2015 with her husband Chris and enjoys being a part of it.

“It’s amazing. I’ve read articles saying singing is really good for your health, and our health has been better,” she says.

“I love the music and performing, and seeing the joy on people’s faces when we sing, and the friendships that we’ve built.

“Bruce and Sue are both the driving force of the choir.”

The group is available for concerts and functions, and people can phone Andrea Round on 09 537 4403. For more details, visit cityofaucklandsingers.net.nz.