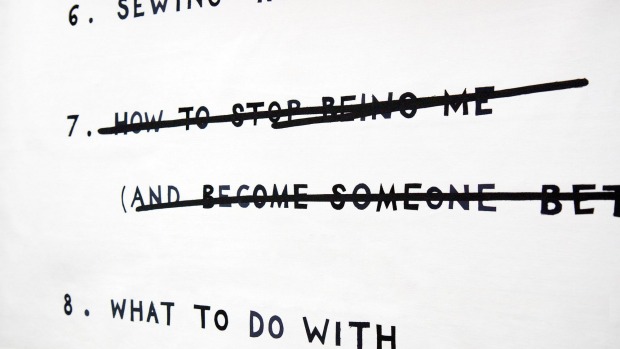 The 2016 recipient of the Olivia Spencer Bower Award, Christina Read has spent her year making plans.  Or has she?  As the title of her current exhibition at the Ilam Campus Gallery –  1. Here’s a Plan – (things to do) – reveals, there is a plan, but not all of it may be achieved, and that may not really matter.

If there are any certainties in 1. Here’s a Plan – (things to do) they reside in Read’s layering of ideas and propositions, one upon the other, with the individual works within the installation allowing us to find out more about the artist’s admirable intentions. As she says: “the works are like propositions, thinking about and making plans for the future”.

Words and phrases, objects and images, all coalesce in Read’s art, with an accompanying tendency to lose the innocence of the messages that they were proposing to convey.  She utilises a variety of media; video, painting, quilting and works on paper, making works that are immediately accessible and conceptually rich.  Her work has this habit of catching the gallery visitor unaware and making unanticipated demands on them, taking them beyond their comfort zone.

They are not alone.  The artist is also there for the ride.  Read grew up in Norfolk and Essex  and the inclusion in the exhibition of Where I was from, a multi-toned pink triangle with the work’s title and a long tangle of coloured ribbons or legs flowing onto the gallery floor from its base, alludes to memories of maypole dancing.  ‘It is about the pagan tradition of the maypole dance and I liked that. Possibly the maypole is really an octopus.  But I don’t mind. Dancing the maypole to me is primarily about dressing up and having fun, with a large dose of self-consciousness and crippling embarrassment chucked into the mix…  When I recall dancing such things as a child, it still induces the feeling of making me want to laugh hysterically and be sick at the same time.”

1.Here’s a Plan – (things to do) also feels like a personal and public response to the Olivia Spencer Bower Award. Under its terms, its recipients receive an income and studio for a 12-month period to develop their arts practice as they may choose to.

Read notes that the exhibition is based on making plans: “plans for a series of exhibitions that I have not made yet which are in turn based on chapters from a non-narrative fiction/autobiographical/self-help book, which I have not written yet. The title of the exhibition, corresponds to chapter one of the book I’ve not yet written. If I were to actually write the book this first chapter would be about the excitement of making plans and envisaging a future more productive ‘onto it’ self.”

If this sounds like an artist making an indecisive statement about their practice, paradoxically, the evidence of the works in 1. Here’s a Plan – (things to do) clearly suggests otherwise. Quilt for my Bed is a hand-sewn quilt by Read that has occupied much of her time over the past year.  A beautiful, formalist and skilfully realised textile, for the exhibition it has been folded and displayed on a clear Perspex box.

Read says that the work came from the idea that she could use the year to do something she would not normally have time for, something slightly outside of her normal practice. “I was going to display the quilt in its full entirety, but when I thought it through, even though I think the quilt very beautiful, I realised folding was the best option. I have folded it up because I was interested in the endeavour itself; the obsessiveness of the task and spending such an immense amount of my residency working on something so seemingly frivolous. It is more about this, rather than the work itself, the show is more about the potentiality of things.”

There is a tangible sense in 1. Here’s a Plan – (things to do) that, just like the artist, her work will also make promises that it will change its mind about.  The spiralling patch-work colours of Meditation Quilt possess all the characteristics of an iconography intended to elicit contemplation and prayer, but the large sign beneath stating “Meditation Quilt”, inevitably deflates such an opportunity.

Why the shift between various media in 1. Here’s a Plan – (things to do)? “For me, it freshens things up, the ideas, but it is always about what is the best material to use for that particular idea.  The one thing that stays the same in all my work is my use of language.”

Chapters, a large three metre high fabric text work, pinned loosely to the gallery wall seems to proudly announce a list of tasks to be completed, as well as two responsibilities that the artist has changed her mind about. “Two are crossed off: Chapters is a list of future exhibition ideas but the two which I have crossed out, I’ve gone off. I have not given up on them entirely which is why they are still present, yet in a crossed out form, as a reminder to myself to reconsider more fully later on. The show has a few crossing outs. Even the quilt displayed in a folded form is a crossing out of sorts.

“I am interested in the declaration of an ambition or aspiration and the indecision and hesitation that invariably comes after. I like those books written about positive thinking and their declaration for change, I read them and feel reassured, with only a very slight smidgen of scepticism. I like the ideas of those books; the potential that they could provide the rules of life. I love the promise of them more than anything else.”