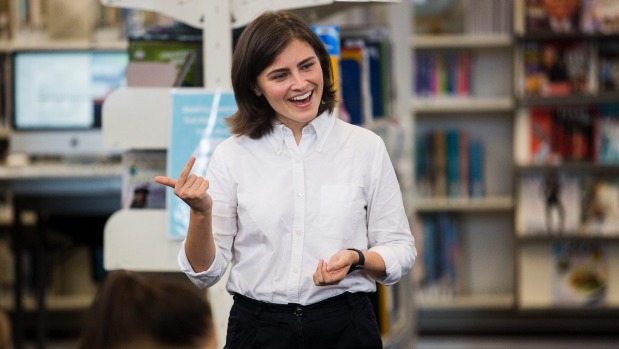 “When you are young you think adults know the meaning of life,” Chloe Swarbrick tells a room full of high school girls.

“What you find out – I’m sorry to tell you this – but nobody really knows what is going on,” the Green Party candidate and former Auckland mayoralty hopeful says.

“Everyone is doing the best they can with the resources available to them.”

The 22-year-old spoke to a group of about 40 pupils from Palmerston North Girls’ High School on Friday and told them they could do anything they wanted.

“Failure is kind of inevitable at some point, it is important how you cope with failing.”

Speaking in the school library, a building adorned with the image of Nobel Peace Prize winner Malala Yousafzai, whose advocacy for women’s education saw her shot in the head by the Taliban, Swarbrick told them to challenge the way things were run.

“Who benefits from the assumption that only 45-year-old dudes in suits can run for politics?”

She recalled speaking to other candidates during the mayoral election.

“They were thoroughly uninspiring.

“They had spent the past few years of their lives earning thousands of dollars and owning their own homes.”

Swarbrick said young people were engaged in political issues, but had lost faith in the institutions.

During the talk, pupils put the hard questions to Swarbrick, asking if a coalition with Labour would compromise Green values, and if she was disadvantaged because of her age and gender.

“I agree with the fact that politicians don’t appeal to young people. They don’t make the effort.”

She also agreed with Swarbrick that politicians only appealed to people every three years.

“Throughout that time, where is the relationship?”

Year 10 pupil Amy Pereira said she was inspired by Swarbrick’s attitude to try things and not be afraid to fail.

Pereira said she had not held a strong interest in politics – “but after this I might now”.