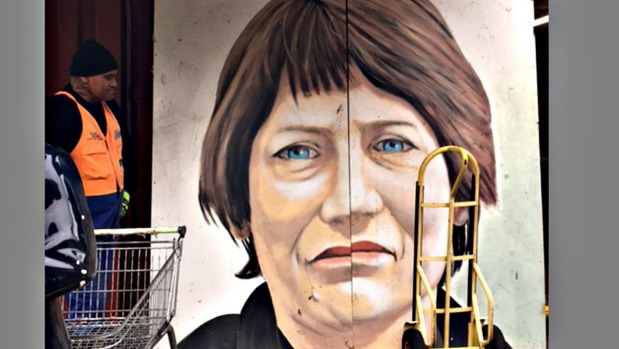 A Chinese expat inspired to come to New Zealand by Helen Clark is happy to have snapped up a portrait of the former prime minister after it was found at Wellington’s rubbish dump.

Auckland businessman Joe Chen secured the giant work for $1840 on Sunday night after a fierce Trade Me bidding war.

Earlier this month, the 2.4-metre-high artwork depicting the face of New Zealand’s first female prime minister to win office at a general election was rescued from a Wellington City Council’s tip.

While the identity of the artwork’s previous owner was not clear, council workers decided to put it up for sale with a $1 reserve.

READ MORE: * Massive Helen Clark portrait found at Wellington dump * Helen Clark resigns from UNDP, saying it has been an honour and a privilege * Helen Clark ‘has bigger fish to fry’ than NZ return after leaving UN, Andrew Little says * When you tweet about looking like Helen Clark in your licence picture * Helen Clark’s UN dream is over – what next? * What other jobs could Helen Clark try, when she leaves the UN?​

After news of the auction was first reported, Clark asked via Twitter for proceeds from the auction “to go to a good cause like Women’s Refuge” – to which the council readily agreed.

Chen came to New Zealand as a 20-year-old international student in 2003, partly inspired by seeing a story about Clark on a Chinese news bulletin.

Clark had welcomed immigrants and international students, and was respected among the Chinese community, he said.

Over the years, he had seen her talking to people around Auckland, and said he was impressed by her character and personality.

Chen, who runs a mobile phone repair shop in Mt Roskill, said he liked to collect “interesting stuff”, and the mural would form the centrepiece of a gallery he plans to open

The mural, thought to have been created by artist Christopher John Finlayson, was put up as part of a genetic engineering protest on an Evans Bay boatshed in July 2002, according to Dominion Post archives.

“While other people might think it’s trash, I think it’s gold,” Chen said.