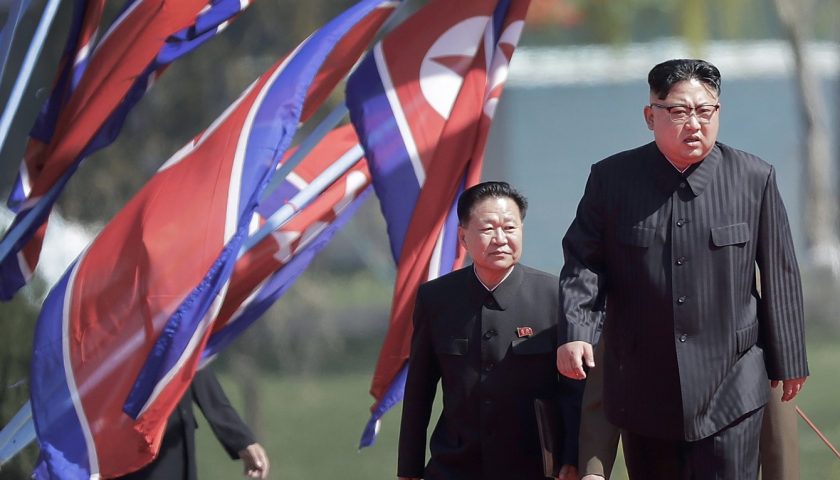 The country warned there would be ‘no winner’ in any war, as tensions soar with the US.

A CONFLICT OVER North Korea could break out “at any moment”, China’s foreign minister Wang Yi said today, warning there would be “no winner” in any war as tensions soar with the US.

The sharp language came after President Donald Trump said the North Korea problem “will be taken care of”, as speculation mounts that the reclusive state could be preparing another nuclear or missile test.

“Lately, tensions have risen… and one has the feeling that a conflict could break out at any moment,” Wang said. “If a war occurs, the result is a situation in which everybody loses and there can be no winner.”

Whichever side provoked a conflict “must assume the historic responsibility and pay the corresponding price,” he said in a joint press conference with his French counterpart Jean-Marc Ayrault.

Trump has sent an aircraft carrier-led strike group to the Korean peninsula to press his point, one of a series of signals that indicate his willingness to shake up foreign policy strategy.

Mother of All Bombs

Soldiers in Ryomyong in North Korea.

Yesterday, the US military dropped the biggest non-nuclear bomb it possesses on Afghanistan, targeting a complex used by the Islamic State group.

Trump also flexed his military muscle last week by ordering cruise missile strikes on a Syrian airbase the US believed was the origin of a chemical weapons attack on civilians in a northern Syria town.

The moves are seen as an implicit warning to North Korea that Washington is not afraid to use force.

Trump has repeatedly said he will prevent Pyongyang from its goal of developing a nuclear-tipped ballistic missile capable of reaching the mainland United States.

A White House foreign policy advisor said today that the US is assessing military options in response to the North’s weapons programs, saying another provocative test was a question of “when” rather than “if.”

There are reports of activity at a nuclear test site in North Korea ahead of tomorrow’s 105th anniversary of the birth of the country’s founder Kim Il-Sung, which have fuelled speculation it could carry out a sixth test.

But Beijing has long opposed dramatic action against Pyongyang, fearing the regime’s collapse would send a flood of refugees across its borders and leave the US military on its doorstep.

“Dialogue is the only possible solution,” Wang said.

Any US strike on North Korea could prompt retaliation against allies or US forces in South Korea or Japan.

But there are few good diplomatic or economic options for the Trump administration.

The North is already under multiple sets of United Nations sanctions over its nuclear and ballistic missile programs, and appears to see these programs as insurance against regime change.

Rattled by Trump’s behaviour, Beijing — Pyongyang’s sole major ally and economic lifeline — has adopted a tougher line against its neighbour, including suspending coal imports from the country for the remainder of the year.