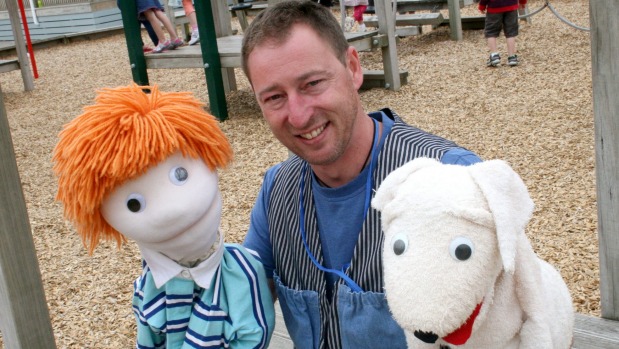 A benevolent boogeyman, creating beautiful origami from paper thrown in a bin he calls home, is coming to a stage near you.

The man is the main character in Papershaper, a play aimed at children aged 3-10 on a tour of the Wellington region in the school holidays.

The play will be at Wellington’s BATS Theatre, the Little Theatre in Lower Hutt and St Peter’s Hall in Paekakariki before the month is out.

It follows the relationship between the man in the bin, and a passerby wearing a basel mask, who visits the park for lunch.

The show was created by Little Dog Barking Theatre Company. Founding director Peter Wilson was inspired by the stick figure disposing of rubbish, pictured on the side of rubbish bins.

The show is still touring a decade later, and has been performed in China and Singapore.

Kenny King has been the puppeteer who controls the man in the bin since the show began.

He met Wilson shortly after graduating from Toi Whakaari where  Wilson was a regular at Wellington’s Lido Cafe, where King worked.

“After about a year of plucking up the courage, I asked if I could audition for him,” King said.

The pair shared a passion for children’s theatre, and he still enjoyed performing the 40-minute piece.

“Even after 10 years I still love it,” he said. “It delights children, and adults. It’s a very sweet, simple story.”

The BATS Theatre performances will be run alongside the company’s new show, Wilfrid Gordon McDonald Partridge,  adapted from the book of the same name by Mem Fox.

The eponymous four-year-old Wilfrid, a boy living next to a rest home, is drawn to resident Nancy Alison Delacourt Cooper because she also has four names.

Where are they performing