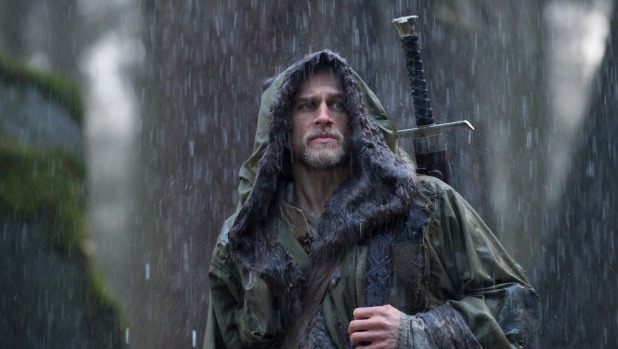 Charlie Hunnam is playing the young king-to-be Arthur, one of British folklore’s most noble characters, as a version of his dad – a real-life gangster. It’s an odd choice. But this is director Guy “Smoking Barrels” Ritchie’s version of the Arthurian legend.

And the big-budget King Arthur: Legend of the Sword is no exception. Ritchie has ripped Arthur out of the English countryside and into “Londinium”, a 7th-century urban landscape of post-Roman ruins, where Uther’s son is adopted by prostitutes from a brothel on London Bridge. As a young man, he is unaware of being destined for bigger things.

“He’s sort of a regular chap, you know,” Hunnam says. “He doesn’t see himself as anything particularly special, other than his uncompromising will to survive. If anything, he’s ignoble when we first met him – he’s running a whorehouse and some protection rackets.

“He’s not, I suppose, the typical humble introverted Arthur that you’ve seen before, he’s a bit of a likely lad from the streets … very self-serving. One of the big journeys he goes on in the film is learning to be less selfish.”

It’s a character with familiar echoes for Hunnam. He’s coming from seven years on Sons of Anarchy, the successful and critically acclaimed TV drama about a gang member growing a conscience. But more than that: “I feel like my whole life I’ve been playing versions of my dad,” he confides.

“You always look to make it as personal as possible but also to find the differences between yourself and the character.”

Hunnam’s dad was “a real tough guy from a very, very tough corner of England”, he has said in past interviews. Ostensibly a Newcastle scrap-metal merchant who organised security for nightclubs, he “operated his whole life outside the law”, Hunnam told Los Angeles Confidential magazine in 2009. “He was an underworld character and a pretty famous gangster.”

The 2013 newspaper death notice for William “Billy” Hunnam is a bit of a giveaway: “These things happen on a big job,” it begins. “The world will be less colourful without him.”

I visit the King Arthur set on a hard day at the office for Hunnam. The May sun is baking the huge Warner Bros studio backlot on London’s north-west fringe. The place is frantic with activity. The make-up and costume tents have processed 400 extras since six in the morning.

Workers bustle over sets being dressed for future days’ shoots: carefully painting Styrofoam rocks, lowering looming cliffs down from cranes, spraying fake algae onto walls, carefully placing the stone from which Excalibur will be drawn.

Just down a muddy track lies Camelot itself, the castle of legend, tucked away behind a line of orange traffic cones and a tall green screen on to which computers will project a warlock’s war elephant the size of St Paul’s Cathedral. Periodically all work pauses, the beeping of the reversing trucks is stilled.

A major scene is playing out: mobs of extras surreptitiously check their smartphones behind ranks of armoured horses and hunting dogs with spiky collars, while on a stage Jude Law’s villainous Vortigern taunts Hunnam’s Arthur before a planned execution.

Needless to say, things go wrong. A silver ball on a stick swoops in to cause trouble, and the executioner and Vortigern’s guards fall awkwardly under vicious attack from invisible terrors while Arthur fights free. I’m pretty certain some computer visual effects will make sense of this later.

In a break between takes, Hunnam confides he’s finding it tough going.

“I twisted my ankle today, fell over and hurt my elbow,” he says. “I’ve been in the sun all day, I feel a little the worse for wear.”

Sons of Anarchy gave him at least one fight scene an episode for seven years.

“I’ve probably done 150 fight sequences and every time you get beaten up,” he says. “Every day you go home battered from doing those scenes, I sort of dread them. But there is some really exciting stuff we’re doing at the end of this – there’s a big crescendo fight sequence which is that really sexy, slick stuff that Guy does. So it’s exciting to be a part of it.”

Hunnam says he was a huge fan of another Arthurian film when he was growing up – John Boorman’s hallucinatory, grandiose, rain-sodden 1981 epic Excalibur. “It really piqued my curiosity about the process of filmmaking … Excalibur and The Scarlet Pimpernel were the genesis of my dream to become an actor.”

But he chased this project not because of Arthur but because of Ritchie – “everyone my generation grew up watching his movies … I thought it would be a really interesting challenge to work with him. The tone of his films are very different from anything I’ve done before.”

Hunnam is ready for the big time – he established a reputation for daring, committed acting in the TV drama Queer as Folk, and hit Hollywood with a lead role in Guillermo del Toro’s robot vs alien blockbuster Pacific Rim.

But Ritchie says Hunnam won the part of Arthur through force of will, not his CV.

“I actually didn’t think Charlie was going to get it,” he says in between takes (and also during one: Ritchie has a very casual directing style). “I think I saw him in a Calvin Klein ad or something and I thought I’d push him to the side. He said ‘Look, I’m going to fly in anyway’. I said ‘nah you don’t need to bother, mate’. Anyway he did, he flew himself in and he hammered everyone else … He just gradually ground everyone else out of it.”

Hunnam says he literally threatened to fight his competitors for the role.

Ritchie doesn’t deny it. He says it suited his vision of Arthur: an “everyman… a man turning himself into the sword [Excalibur]. Each knock that the sword receives makes the steel harder. That’s everyman’s story.”

Ritchie’s twist on Arthur doesn’t stop with the hero and the setting. The baddy of the piece, Vortigern, is a relatively obscure character in the usual legends. Jude Law, who plays him, says he was drawn to the character’s complexity, rare for a sword and sorcery script.

“I still stand by the idea that the bad guys never think they’re the bad guys – they always think they’re the good guys … and when you apply that it gets interesting,” Law says. “[To prepare for the role] I’ve been watching several of my favourite villainous roles – I won’t say which, because some of them might read this – and one thing I realised was the less you say, the more status you have. So I’ve been giving all my lines away. I’ve been saying ‘I’m the king – I wouldn’t say that, give [the line] to him’.”

Law says the film is “a little darker” than Ritchie’s Sherlock Holmes films – “I think he’s realised that it has to be, he’s discovered that since we’ve been making it. There’s humour in there, but not in my scenes.”

Ritchie says he has “wanted to make King Arthur forever” and he doesn’t think anyone has really done it well. “I did enjoy the Boorman Excalibur, but clearly it was restricted by the technology around then,” he says.

So he wrote a script. Then Warner came to him with someone else’s – which Ritchie loved for two reasons. First, it involved “very large animals” – such as 90-metre-tall elephants. Second, it covered Arthur’s rise to the throne, not his entire epic arc from boyhood to kingship, Holy Grail quests, betrayal and death.

“It was magnificent, fantastic in scale and you didn’t have to address the entire narrative of King Arthur within two hours,” Ritchie says.

There are rough plans for up to five sequels covering Lancelot, Merlin, Guinevere et al – depending, of course, on the first being a hit.

King Arthur: Legend of the Sword is released in cinemas on May 18.