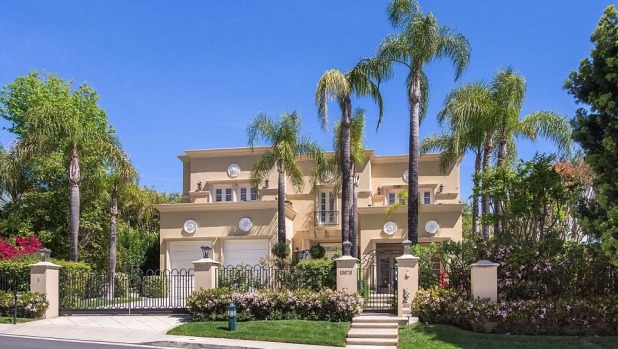 When Tom Jones famously asked “What’s new, pussycat?” over 50 years ago, he wasn’t singing to your average domestic calico.

One look at his living room and it’s clear the big-voiced Welshman prefers more exotic felines.

Along with an abundance of leopard print, there’s a healthy representation of other African animals, including carved wooden giraffes cavorting in the upstairs gallery and an elephants-on-the-Serengeti fabric in the master bedroom.

READ MORE: * Celebrity sale: Eurythmics’ Dave Stewart lists a piece of Hollywood history * Tom Jones’ wife Linda dies after a battle with cancer * Even at 75, Tom Jones has still got it

The legendary singer has put his home of nearly 20 years on the market. The 16-room, 750-square-metre Mediterranean-style contemporary villa sits within the guard-gated confines of Mulholland Estates, in Beverly Hills.

The listing agent is Cecelia Waeschle, with whom Jones has had a long professional relationship.

Before moving to this house, Jones lived in a red brick Tudor-style mansion on the Bel Air flats which had once belonged to Dean Martin.

Jones famously paid over NZ$100,000 to install a special red phone box from his hometown of Pontypridd, Wales, on the property. Jones put it by the pool and had it re-wired to be fully functional.

In an interview with the BBC, Jones explained “We did not have a phone in our house when I was growing up so I spent hours every night in the call box. Most of my conversations in the box were to Linda, when I first met her, and nearly 40 years on we are still together.

“It was from a call made in that very box that I learned I had become a father and once when it rang in the States I found out I was a grandfather,” Jones said. When Jones sold that house to Oscar-winner Nicolas Cage in 1998 for around NZ$9 million, he had the red phone box removed, and repositioned here at the Mulholland Estates home.