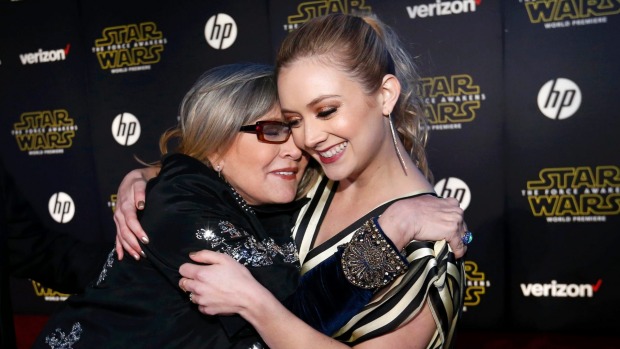 Get the tissues ready, because you’re about to cry enough to tears to fill a bacta tank.

Actress Carrie Fisher has been remembered as “one in a billion” during the 40th Star Wars anniversary celebrations in Orlando, Florida.

Organisers wrapped up the first day of the four-day event with an emotional tribute to the kindest, fiercest princess in the galaxy.

Star Wars creator George Lucas also gave an emotional speech, praising Fisher’s intelligence and warmth and recalling how he never hesitated when making the decision to cast her in A New Hope.

READ MORE: * Carrie Fisher’s death certificate confirms heart attack * Highlights of Carrie Fisher’s Hollywood life and times * Carrie Fisher’s scenes may be cut from the eighth Star Wars film “She was very strong, very smart, very funny, very bold, very tough, and there really wasn’t much of a question,” he said. “There are not very many people like her. They are one in a billion.”

Lucas also recalled how Fisher was never afraid to pull him up on his instructions. Dialogue, for example, was a constant (but constructive) battleground.

“She wore a dress through the whole thing, but she was the toughest in the group,” he said. “She will always be the princess who took command and never backed down… we will all love her forever and ever.”

Fisher’s daughter, Billie Lourd, also took to the stage dressed as Princess Leia to recite one of her mother’s most famous monologues from the Star Wars franchise.

Lourd, who made a brief appearance in The Force Awakens alongside her mother, told the crowd her mother taught her that life “life isn’t funny, it’s just true, and that is unacceptable”. The actress then introduced a tear-jerking video tribute.