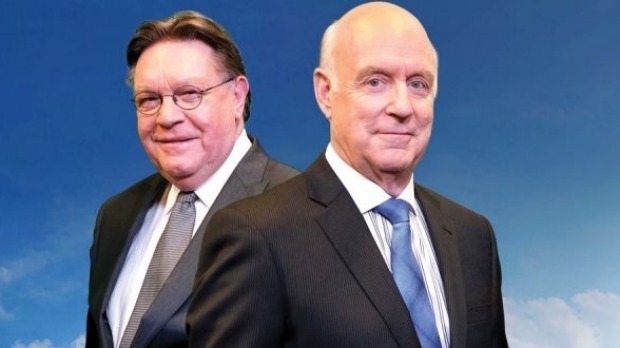 “I’ll let you in on a secret,” says Bryan Dawe. “People have always asked me: ‘How did you sit across from him and not laugh?’

Dawe is speaking, of course, of his decades sitting opposite John Clarke, as together they gently – and sometimes, savagely – punctured the artifice of public figures vain enough to believe they were the mighty.

He is, of course, speaking of the late John Clarke, dead of a heart attack last weekend on a bush track leading up Mt Abrupt in the dreaming Grampians ranges.

“Mt Abrupt! John would have loved the huge irony associated with the place of his exit lounge,” says Dawe.

We don’t have to explain who John Clarke is, or was. Or Bryan Dawe. Clarke and Dawe. They filled the Australian cultural, political and comedic landscape. They owned satire. You couldn’t have one without the other. Two-and-a-half hilarious minutes every Thursday evening on ABC TV that often explained more about current events than all the other stories of the week.

Dawe has been in anguish ever since John Clarke’s wife Helen phoned him on Monday morning. It wrenched him back 54 years to the worst day of his own boyhood. He veers back to it for a minute, as if to postpone confronting this latest loss. “My father died the same way. A massive heart attack. I was 15. It left me a Legacy kid. Mr Burnie was our legatee (Bryan was one of four children). He saved our family. I’ll never, ever forget him and what he did.”

It’s about the suddenness of that loss that is so hard to comprehend. “They’re a huge part of your life and overnight they’re gone. I re-lived the day my father died; it came flooding back when Helen rang me. I thought she was ringing about something else. She said ‘Are you sitting down?’ and I said, ‘I don’t want to hear this, I don’t want to hear the rest of it.’

“We didn’t talk very long. And then I got very, very angry. “Here was one of the kindest, most generous, most brilliant people I was going to meet in my life, and a whole list of people who could have gone before him were still there.

“The injustice of it.

“And then you think about John’s family, Helen and the girls, Lucia and Lorin, their loss. It’s not your loss.”

The requests from the media for interviews and comment came flooding in from across the land. Dawe, who can own a stage and fill an auditorium with the wit of his words and the characters he can summon from the ether, refused.

“I couldn’t talk about it. The realisation that I was never going to speak with this man again. We’d talked all the time for all those years about all sorts of stuff. He’d never forget what was going on in your life.”

Dawe veers back to Clarke’s eyes, those constantly amused apertures to the heart that Dawe always had to avoid lest he be rendered helpless during a performance.

“The trick with John was he had these sparkling eyes. He was a mischief maker and his eyes went looking for mischief. You could see it and it would set you off.

“Neither of us could look at each other when we were doing the show.

“There was a particular thing when I played the headmaster and he played the schoolboy. I’d go, ‘Sit up straight! Scott, Scott, Scott’, or whoever and he’d go ‘What? Aww, what have I done wrong?’ just like a naughty kid at school.

“We loved doing the schoolyard fights – way back to Keating and Hawke it’d be ‘I want the bike, Bob said I could have the bike, but now he won’t give me the bike.’

“And it just continued. Costello and Howard, Rudd. All of them. Abbott. Turnbull. ‘I want the bike and he won’t give it to me.’”

Clarke and Dawe set themselves apart by never dressing in costume. They simply invited you to believe that Dawe was a TV current affairs interviewer grilling Clarke as anyone from a prime minister to a president. And glory to behold, audiences simply believed.

“We started on radio and you don’t need to dress up on radio,” says Dawe. “When we got on TV it never occurred to us to dress up. It isn’t the costumes. It’s the issues.

“We were on ABC radio for a year before we went to TV, you know.

“I’d got the job as head of the ABC radio comedy unit in Melbourne – hilarious itself, because I was the unit, there was no one else – and I was doing [Dawe’s comedic characters] Roly Parks and Sir Murray Rivers and so on.

“Michael Ingamells was an executive producer with ABC radio drama in Sydney, and he discovered the comedy capital, Melbourne, didn’t have a comedy unit. So he just gave me a total free hand to do whatever I wanted to do. It was a great act of trust.

“The first week we started, we both went to see John. I didn’t know him, but I knew his work. Fred Dagg and The Gillies Report and farnarkling and all those things.

“The first time I saw him on TV he was in The Gillies Report dressed up in a huge chicken outfit. Phil Scott, the musical director from Sydney, was interviewing the chicken about politics. What John did was remarkable. John controlled the timing and you just knew.

“So anyway, we trudged over to the ABC at Ripponlea and said to John: ‘We want you to come back to radio.’

“I said, you can do whatever you want.

“We were dealing with a thoroughbred here, who’d never failed at one thing. We both believed, if you deal with good people, they’ll fill it out, whatever it is.

“Clarke had been writing political interview satirical sketches for The Age for some time. It turned out the style merely needed a microphone and two voices.

“Three weeks later, we were doing the interviews for radio,” says Dawe.

It was 1988. Clarke always wrote the scripts, and continued to do so for the next 29 years. Sometime Dawe would tinker. The timing and the empathy between the pair was something made in heaven.

“Our very first interview was five-and-a-half minutes, and I interviewed him as Prince Charles, who was bringing out to Australia a replica of the first barge that had gone out to Captain Cook’s Endeavour. It was so crazy. Totally absurd. I thought, shit that’s funny,” says Dawe.

“What was obvious straight away was what our roles would be. We didn’t discuss it.

“I knew I had to play it dead straight and not try to be funny. And John was always going to be the clown of the two. We just fell into those roles.

“I’d always admired the straight man in comedy duos. Jacky Gleason in The Honeymooners (an American sitcom from the 1950s) was a big influence. Very early TV and shot live. That’s dangerous stuff.

“Audrey Meadows played Gleason’s wife and she played it straight. She’d deadpan while he was going off, totally madcap, the audience killing themselves laughing … and I thought, straight’s very funny.

“So I would be the counterpoint for what John was doing.

“We never discussed what it should be. It just became what it was.

“From the start I interviewed: ‘Thanks for your time, thanks for joining us.’

“John was always looking for another form, even though he was so successful with Fred Dagg and all the other things he’d done. It was quite evident, to me at least, that this interview format would work.

“The second show we did on radio John appeared as [the actress] Meryl Streep. We were told it would never work.

“Talk about absurd! I’m asking Streep to explain the subtle differences in the accents of Australians and Americans. John goes into great detail. A male doing Meryl Streep talking about the technical differences between US and Australian accents. It was around the time Streep had appeared as Lindy Chamberlain in the film Evil Angels about the baby Azaria and the dingo at Uluru.

“If I was ever in doubt, script number three had me interviewing Sir Joh Bjelke-Petersen on his retirement from his career as a comic. It remains one of my favourite scripts. Bjelke-Petersen says he thought his joke about the car that ran on water [an actual proposal by Bjelke-Petersen when he was Queensland’s premier] was pretty funny, but his all-time favourite ‘was when I ran for prime minister. I think it was the timing. You might remember that I announced I was going to run when I was visiting Disneyland’. And the thing about it, that was true! Joh really had been in Disneyland when he announced he was running for PM.

“After a while, John dropped recording Fred Dagg and we just did Clarke and Dawe. That was the birth of it. On radio for a year. And then we went to TV [first to Channel 9, and then to the ABC].

“I always deferred to John. It was his idea.

“Such longevity. Three decades. Why did so many people grow to love Clarke and Dawe, and keep loving them?

“I think the public saw these two characters as people who could be trusted in a time of huge anxiety and a growing lack of trust,” says Dawe.

“During the EU debt crisis, when countries like Greece were broke and in danger of leaving, we were very proud when the Wall Street Journal put a link to our show on its front page with something along the lines of ‘we don’t want to worry you, but here’s the European crisis explained in two-and-a-half minutes.’

“John had the great ability to reduce a complicated problem to its essence.

“Our show about the energy crisis just a few weeks ago – people said it explained to everyone what it all meant.

“John said afterwards, ‘maybe what we do now is just explain things’.

“It was always about the audience. And now he’s gone.”

Dawe thinks for a bit. “You know,” he says. “[American humorist] Will Rogers said it all: ‘We can’t all be heroes, because somebody has to sit on the kerb and applaud when they go by.’”