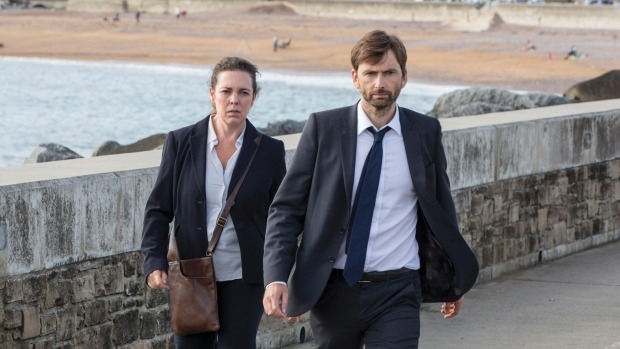 Dwarfed by golden cliffs, hemmed by the English Channel, watching the sun rise on a mystery – the final moments of Broadchurch’s last ever episode left us where the show found us all the way back in season one.

Be Warned: this article contains spoilers for the season finale of Broadchurch.

This time the body on the beach is the show itself. The mystery: why would you can a show so perfect, so deftly crafted and beautifully performed, with only three seasons under its wide, capable belt?

Unlike season one, where the murder’s identity seemed pulled out of the the shock-for-shock-sake’s hat, the gruesome discovery that Trish Winterman’s (Julie Hesmondhalgh) rapist was none other than a bullied 16-old-boy, seemed inevitable.

Michael Lucas (Deon Lee-Williams), the lad in question, has lurked in the background of almost every episode.

The grand reveal – that Michael, like the show’s women, is yet another victim of toxic masculinity, the inevitable end result of male entitlement and piss poor self-esteem – seems almost obvious.

Writer Chris Chibnall set out from the start to deliver a heartfelt homily on the ways masculinity, objectification and entitlement damage our society.

In that, he has been brutally successful; the scenes of that rudderless teenage boy bending to the will of his posh, sociopathic manipulator, sobbing as he committed a brutal act of dominance over Trish against both their wills, is seared into my memory now.

Chibnall’s skill this season has been in delivering the message without turning it into a lecture. It’s one thing to say toxic masculinity robs us all of the power to consent, but to show it, indisputably, is masterful story-telling.

(Chibnall goes on to much lighter fare now, as show runner for Doctor Who – so expect some much denser concepts deftly disguised as family entertainment from that show.)

Even as Michael’s villainy is revealed, it’s contrasted with Mark Latimer’s rise out of the masculine quagmire.

Loaded down with guilt at failing as a father and husband, and hell-bent on revenge, Mark’s story arc seemed set to be another cautionary tale about the dangers of machismo.

But it turned into a redemption story. With his failed suicide attempt uncovered, and the truth of his relationships embraced, Mark leaves Broadchurch a blank slate, able to give up his self imposed roles of defender and provider, and embrace something different – though we will never know what.

The beach is empty, the coroner has taken away the body of Broadchurch, and the other verdicts are in:

Michael Hogan called it an “emotionally exhausting ending” in the Telegraph.

In The Guardian, Mark Lawson sees the reveal as a fault, the uneasy juxtaposition of fact and drama:

“The sick justification given by the multiple rapist (Leo Humphries, played with unnervingly charismatic and oily charm by Chris Mason) – a desire to subjugate and control women – is a recognised psychopathology in such crimes… but the writer’s need to keep Humphries under the radar of armchair detectives resulted in him being one of the least fully explored and explained characters.”

Clare Rutter at The Metro was similarly unconvinced by Leo’s confession: “This series didn’t live up to the intensity and suspense of ‘who killed Danny Latimer?’, stopping abruptly at the cusp of rabbit holes rather than exploring the warrens.”

While I disagree about the reveal, we do all agree on one thing – the landscape of procedural TV drama will be somewhat barren without this beguiling show – and that perhaps Miller and Hardy deserve a spin-off romantic comedy of their own.

In this age of endless binge watching, 23 episode US seasons and endless regurgitation, the idea that something so beloved should just… stop… seems quite alien.

But Broadchurch’s brilliance has always been in making high drama seem utterly human, and what could be more human – or bittersweet – than having to say farewell?