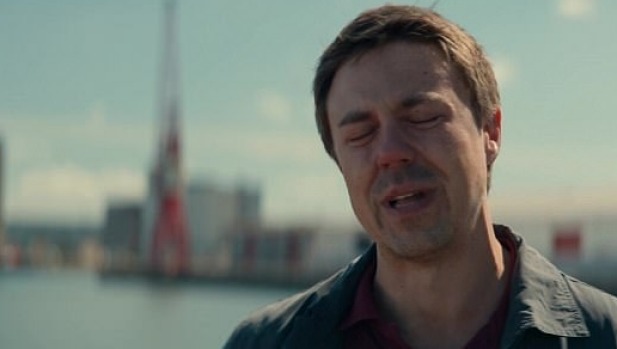 It wasn’t clear where the “B” story – the Latimers ongoing struggle to make sense of the death son Danny in season 1 – was going this season, but now we know.

Mark Latimer (Andrew Buchan) has spent season three making a right royal pain out of himself: First, publishing a tell-all book about the death of his son Danny, then repeatedly ignoring his elder daughter and estranged wife’s please to let them get on with their lives and finally by trying to lure vicar Paul Coates (Arthur Darville) on a murder road trip.

Through it all his guilt, self-recriminations and straight-up rage over the horrible way his son died, have been a lead weight, not just on him, but on the show too, dragging us back to season one, when what we’ve really wanted was to storm ahead with the current, similarly heartbreaking, mystery.

But then came the final scene of Sunday night’s episode, and it all made a heartbreaking sense. As Mark Latimer set himself adrift in the North Sea, utterly alone and undone by his obsession with revenge, it was clear his story was always going to end this way.

Den of Geek’s Louisa Mellor voiced what we were all thinking as the episode played out.

“If the ITV website had a ‘choose your own ending’ option to save Mark Latimer, I’d click morning, noon and night between now and next Monday to get that poor man out of the water.”

Point us at the button, ITV.

The Radio Times’ Ben Dowell was praying that Mark would find something to live for too, as was Sally Newell over at the Independent.

But while Mark Latimer’s soggy, sad ending was the focus of most reviews, The Telegraph was quick to point out that we shouldn’t chow down on the episodes major red herring: Ed.

Stalker Ed Burnett (Lenny Henry) was not going to be the serial rapist according to Michael Hogan. Without excusing Ed’s seemingly crackers behaviour, there’s no way someone that obvious is guilty on this show.

It’s all a bit too obvious, says Hogan. “Surely he’s just this week’s prime suspect and not the true culprit? In the meantime, poor Lenny. That custody cell looked a lot less comfortable than a Premier Inn.”

Finally, TV.BT.com and Caroline Frost at The Huffington Post posed some key questions that anyone watching Sunday night’s show would want answered:

1. What’s up with Ed’s grass-stained suit? Is it just dirt from the farm shop? Is he just a a bit of a slob?

3. Why is Ian so creepy? And why is he trying to set up Ed? Is it just deflection, or something more?

4. How did the police not know one of their officers was related to a person of interest?

5. Just what is on that computer that Ian’s so worried about?

What do you think? Who’s guilty? Let us know what you think in the comments.