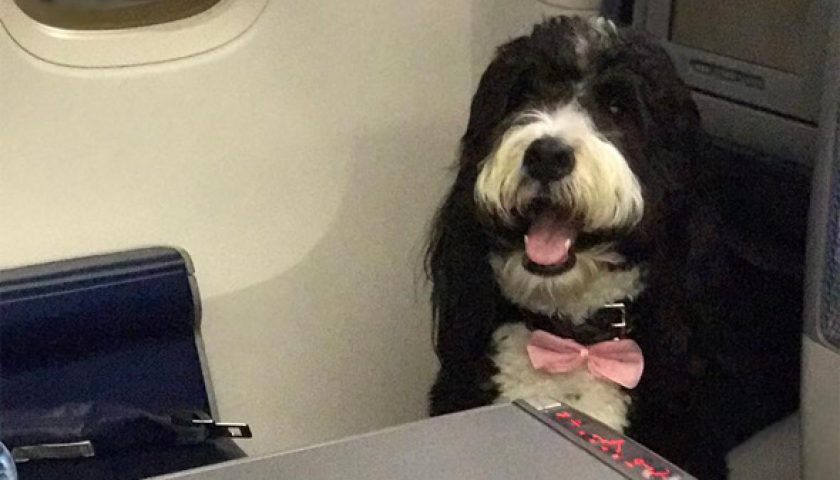 Charlie, the adorable bow-tie-wearing dog who landed at the center of a national controversy on Friday night when NBC News Senior Political Analyst Mark Halperin tweeted a photo that many took to mean he was unhappy to be seated next to a dog wearing a bow-tie, has reached out to his former seatmate on Twitter with a conciliatory message (and a new bow-tie):

But the exact circumstances under which Charlie met the co-author of Double Down: Game Change 2012 are still a matter of vigorous debate. In the days since Halperin inadvertently provoked the ire of dog-loving Americans, he has attempted to clarify precisely what was going on, but many questions remain. First Halperin wrote that the point he intended to make by tweeting a photo of an adorable dog in a bow-tie captioned “Seriously, @delta??!?” was that, in his words, “on long flt Delta sat dog apart from its owner,” despite the fact that the dog was clearly sharing a seat with another person in the photo. After explaining that the unidentified knees in the photo were “the owner briefly w/ his dog to try to get him settled in dog’s own seat pre moving across aisle, where he was inexplicably assigned,” Halperin added, in response to a question, that he offered to switch seats with dog’s owner as soon as he realized what had happened:

The confusion caused by his original tweet, according to Halperin, came from trying to do too much good at once; he both wanted to delight his Twitter followers with pictures of an adorable dog in a bow-tie, and point out a serious flaw in Delta’s procedures for assigning seats to support animals, p:

Talk about doubling down! However, Halperin’s recollection of that fateful red-eye doesn’t jibe with that of Charlie’s owner, Anthony Pisano. Pisano, who works as a flight attendant for Delta, reached out via Twitter to say that, not only did Halperin not offer to trade seats, but, rather than expressing concern that Delta was seating support animals apart from their owners, he told a flight attendant that he refused to sit next to a dog. What’s more, in Pisano’s telling, Halperin wouldn’t speak to him or even look at him while the situation was resolved. (Given recent confusion about United and their leggings policy, Pisano clarified that both he and Charlie had first-class “full fare regular passenger tickets,” and were not travelling as employees.) Here’s his account:

So it was the 10:45 red eye on delta. in first class the seating arrangement was A-BC-D seating. I had purchased 6A and 6B and Halperin was in 6C. The dog and I fly back and forth from California to NY 2–3 times a month. I am always aware to make sure to get the dog her own seat (she lays on the floor and sleeps) to ensure she doesn’t encroach anyone’s personal space. So I put Charlie (the dog) in 6A where she was great. She was in arms reach and everything was cool. Right before we took off the dog came and sat in between my legs for take off so she was secured. At this point halperin (I had no idea who he was) calls for a flight attendant and tells her that he refuses to sit next to a dog. Those were his exact words. At that point I noticed he took a picture of the dog which I just ignored. Next thing you know the lead flight attendant asked if I minded giving halperin 6A. It was so strange he wouldn’t even look or speak to me about it. If he would have asked me I would have obliged, no big deal. I couldn’t believe how rude this guy was carrying on as I sat right next to him. So I obliged, he moved into 6A and left his shoes and a mess in his little first class cubicle area. I politely brought him his shoes and belongings to which he literally looked the other way and that was that. I then woke up this morning to a friend sending me the article and was in shock reading his tweets. Mind you Delta did absolutely nothing wrong, the flight attendant were extremely accommodating to his wishes all while trying to make sure I wasn’t upset in any way. They handled the situation kindly and professionally.

Air travel can be stressful even in first class, and there are plenty of valid reasons to not want to sit next to a dog, but it is difficult to reconcile Halperin and Pisano’s different accounts of their flight. So who’s telling the truth? It would be unfair to Halperin, who has long championed a not-very-adversarial press, to put our fingers on the scale, so let’s put the question a slightly different way: Between Mark Halperin and Charlie, the adorable bow-tie wearing dog, who looks more presidential?