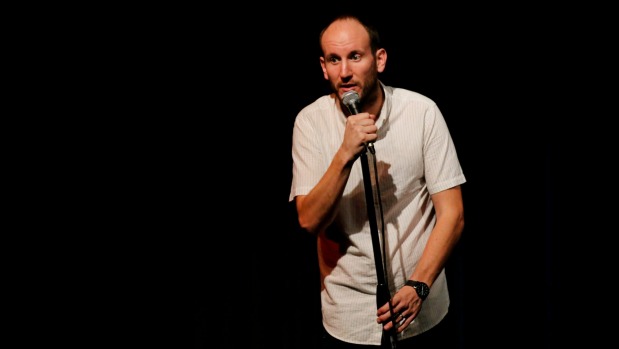 Blenheim-raised comedian Tony Lyall is in search of what makes people happy, be it a good meat pie, having a baby or having a chat with your mates at the pub.

That search is the topic of his first solo show at the NZ International Comedy Festival, called Happy Hour, which runs from Tuesday to Saturday in Auckland.

Tony says the show covers off the little things in life as well as the bigger milestones like having a baby – he has a four-month-old son – that put a smile on people’s faces.

Now based in Auckland, he works as a writer on the new current affairs show The Project, but Tony reckons his Blenheim upbringing has definitely influenced his comedy.

“I used to do a joke that I was from a wine region but really only drank boxed wine,” he says.

“Quite often I refer to the fact I’m from the South Island, it’s a good way to get half the crowd onside and the other half pissed off.”

Tony’s introduction to comedy was almost by chance. He randomly decided to sign up to do the Raw Comedy Quest, at Auckland’s Classic Comedy Club, and got to the semi-final.

He travelled to London in 2012, where he did a few gigs “for beer money” before once again getting to the semi-final of a comedy competition – the prestigious Amused Moose Laugh Off.

This sparked his appetite to take comedy more seriously when he came back to New Zealand, working first for the The Rock radio station before moving on to The Project.

But getting on stage and standing in front of a crowd – which in the United Kingdom were “a lot drunker” and occasionally “unnecessarily aggressive” – is still the biggest rush for Tony.

“I still get nervous and get the shakes before going on, but that’s part of the thrill in a way. You’re up there getting a laugh for something you’ve thought of on your morning run, or whatever – it’s invigorating.”