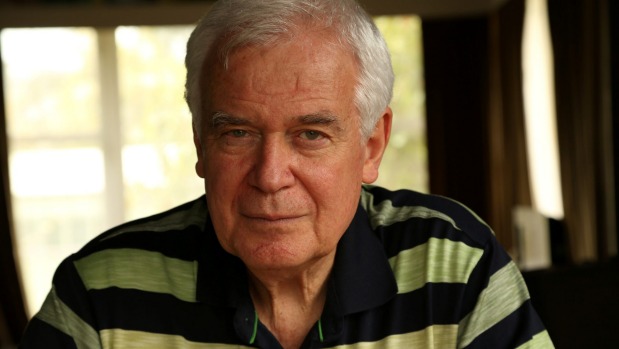 Michael Havas was excited by the prospect of revisiting the war documentaries he made more than 40 years ago. He just had no idea where they were.

The Czech-born Kiwi filmmaker admits that while he was sure prints of Once Upon an Island and Sons of Tu Matauenga existed, or digitised copies had been made, laying his hands on them was another story.

“I’d been living in different countries, travelling and there were a couple of divorces on the tables – things get lost or mislaid,” he says down the phoneline from his home in Prague.

“Eventually we found a print of Once in my bedroom in Papatoetoe with my 98-year-old mother. It’s the room where I studied when I went to Otahuhu College and Auckland Uni and it was there, buried under a Ping Pong machine.”

It was the emotional link to the past he needed for the latest chapter in what is now a trilogy of tales about New Zealand’s involvement in World War II’s Battle of Crete. Beyond the Battalion, which screens on Maori TV on Anzac Day, charts Havas’ journey in making both Once and Sons and really just came about by accident.

“I’d always been interested in making a documentary about the artist Gottfried Lindauer, but had never got around to doing it,” says Havas, who has worked for the likes of the BBC, Channel  4, Discovery and MTV during a four-decade career.

“At one stage, I rang my good friend Lindsey Shelton and asked him if he thought there might be someone in New Zealand who could be interested in getting involved. To my surprise, he mentioned that there was a guy called Julian Arahanga who was making a series called Behind the Brush.

“So I contacted him and asked him if he would like a researcher. Then, when we caught up one evening, I mentioned to him that I had made a documentary about the 28th Maori Battalion revisiting the Cretan battlegrounds in 1977. He went white, before saying, ‘why don’t we think about revisiting what has happened to the film, what happened to the battalion and put it all into some sort of contemporary context?’ “

The pair then wrote a treatment together, pitched to Maori TV and, after securing financing from them, began shooting their doco in New Zealand, Italy and Crete.  But if finding a copy of Once hinged on simply searching in the right places, securing Sons was a far more complicated process.

“We knew there was a print in the National Film Archive in Switzerland because of it had a Swiss producer –  Peter-Christian Fueter. However, he had sold his company 10 years ago to one that produces commercials, not ethnographic documentaries. Luckily he was able to negotiate an agreement with them whereby I can get the copy back again and bring it to New Zealand. We’ve sold it to them as a symbolic gesture of a Swiss company returning indigenous artefacts.”

Which seems somewhat appropriate given the subject matter focuses on how members of a nation from the other side of the world helped a small European island in their hour of need. Or, as Havas distastefully pitched it to Fueter when he was seeking funds for Sons: “Former cannibals fighting for European civilisation”.

Although New Zealand-educated (including a first-year history paper at Auckland University), Havas admits he knew nothing of the Kiwi involvement in the Battle of Crete until he visited in the island in 1973. Initially, the locals were less than friendly to him and his German girlfriend, until they heard of his New Zealand heritage.

“Suddenly I was overwhelmed with gifts and hospitality and places to stay, free food and drink, as they told me with emotion and passion what New Zealand soldiers had done for Cretans – the sacrifices they made – during the war.”

Researching the battle eventually brought Havas, who was then studying at FUMA (the Czech Film Academy), back to New Zealand, where he finally met a man he’d been corresponding with by letter for two years – Ned Nathan. Part of the 28th Maori Battalion, Nathan had been wounded in the battle and hidden from enemy search parties by a local Cretan family. Eventually he married one of them (Katina), with their love story also immortalised in a novel by Patricia Grace (2009’s Ned & Katina).

“Ned not only put me in touch with lots of other people, he was also convinced that I should be the one to accompany the battalion on their pilgrimage back to Crete. TVNZ were keen to cover it and had the money to do so. But Ned stood up and said, ‘listen, there’s a guy out in Europe, a New Zealander who has already made a film about us on Crete – I want to make the cruise with him’.  Ned wrote to me and said, ‘if you can get the money, we want to do it with you’.

That’s where the Swiss producer and that “former cannibals” pitch came in.

“When I rang Peter’s office, he was actually in a trench in the mountains doing his annual compulsory military service stint as an officer. They put me through to his military field phone – it really was amazing he said yes.”

Even better, Fueter gave Havas an average Swiss salary for a year to cover his costs.

However, after making Sons, it was 20 years before Havas set foot there again – something he now views as “a bit of a mistake”. “The Island did so much for me – it moved me in every possible way and then, for some inexplicable reason, I didn’t go back.”

Perhaps that what made him even more determined to bring Beyond the Battalion to life – a chance to once again connect with the place and people.  Havas confesses that he was concerned that it might be hard to rediscover the Crete he once knew – tourism has taken off in the intervening years – but, he says, away from the big towns, not much really had changed.

One of the particular delights of this project was being able to screen Once for the locals of Palaiochora, he says. “It was not an easy feat. We had to get the technology up and running and then cope with ‘Cretan Time’. At the start time of 7pm, there were only three people in the hall. By 7.30pm – there were more than 100. The emotion the screening generated was amazing.”

Plans are already in place to take Beyond the Battalion to the annual Battle of Crete Commemorations in Chania in May and the Chania Film Festival in October.

Havas says he believes the new documentary can play an important role in helping people to remember the feats of generations past.

“That’s been one of the most interesting things. When I made the first two films, I was talking to the protagonists. The men who had held rifles and taken potshots at paratroopers. Now, we were talking to their children – some of whom are 80 years old.”

Although proud of the finished product, Havas hopes additional funding can be found to make a longer version “for educational purposes”.

“What has been painful in this exercise is that we’ve had to squeeze lots of wonderful, tragic, human, powerful stories into 50 minutes. There was a lot of very important material, which I think is too valuable to be just left on the cutting-room floor.”

He hopes viewers take away a strong message about the fortitude of people standing up for their beliefs.

“I was on a train recently with a group of French students and we were talking about Brexit and the teacher said, ‘you know, we are the first generation in Europe who have never had to go through a war’. Which was quite a stunning thought really. I believe that’s because of the way France, Germany, Britain and Italy got together and said ‘let’s make a European family – let’s work together’. That’s why I think Brexit is not a good decision.

“I also think that we take so many things for granted these days that I would be happy if people, when they see this documentary, suddenly realise how much sacrifice has gone into helping secure the comforts we have – and also why diversity is so important.”