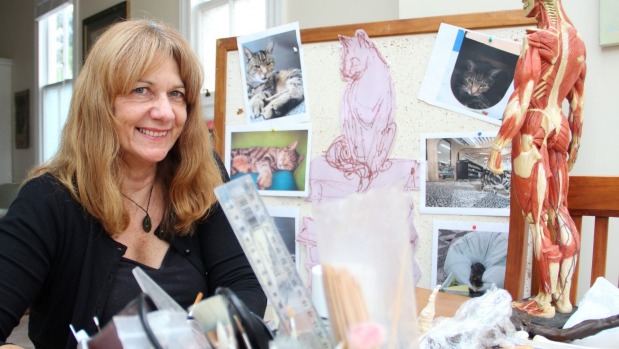 Erecting a $25,000 bronze statue in memory of your dead cat may seem excessive.

But, as the staff at Auckland’s Devonport Library say, if you’d met Benjamin, their resident feline for 15 years, you wouldn’t think so.

“Someone said to me it’s not us that humanise animals, its animals that humanise us, and I thought ‘yeah, that’s what really happens when an animal becomes part of the community of its own volition’,” Devonport librarian Fiona Startup said.

Benjamin died on January 27 and, following a public service that attracted over 200 people, Startup was encouraged by her daughter to create a statue in his likeness.

Following talks with her colleagues at Devonport Library, on Auckland’s North Shore, it was proposed a one-metre bronze statue of Benjamin sitting atop a pile of books could be placed beside the library entrance.

Having trained as a sculptor in Auckland and California, Startup is confident she is capable of doing justice to Benjamin’s “feisty personality”.

“A lot of people in the community have said ‘we want it to look like Benjamin’, so I’ve reassured them it’s not going to be some nouveau punk thing with his tail coming out of his ear,” Startup said.

“I really like the idea that it’s a bit quirky having a sculpture of the local cat in the village. I think it fits with Devonport as well, it’s always been quite an arty village.

“It will get the afternoon sun there and get warm. You can just imagine he will get a shiny head from everyone stroking it.”

With the library’s ambitions set, it’s now a process of obtaining Auckland Council consent to place a structure on public land, and raising the funds from the public.

Thankfully, Startup has already knocked a considerable sum off the $25,000 price tag, through a generous subsidy on the bronze casting work from Richard Wells of Artworks foundry.

After quoting the price for the one-metre bronze statue at $25,000, Wells said he could do it for $9000 because he is an animal-lover and has family connections to Devonport.

“He’s very much an animal fan, he loves to do little statues of dogs. So, as soon as he saw it was a cat, he really wanted to support it.”

A further $1500 will be needed for installation, with Startup doing her sculpting work for free.

A Givealittle page, “Benjamin the Library Cat Sculpture”, has been set up to hopefully raise $10,000 from the community, with fundraising events also planned.

A petition supporting the Benjamin statue has also been established to add weight to the landowner consent application to the local board, and then Auckland Council.

Devonport-Takapuna Local Board member Mike Cohen said he is hopeful consent will be granted.

“This is a relatively small statue commemorating the effect Benjamin had humanising the Devonport Library,” Cohen said

“We should be encouraging people putting up public art to make communities better places to live in.”

Startup is equally confident there won’t be many objections.

“He was only a cat, but somehow he managed to touch all levels of the community, and they were very proud of the fact they had this library cat sauntering around town,” she said.

Benjamin lived at the old Devonport Library for more than a decade and, when it was rebuilt in 2015, a cat flap was installed especially for him.

He was also immortalised in a colouring book, Benjamin’s Book of Library Fun, by comic artist Arthur Whelan, where Benjamin featured as everything from a steam-punk astronaut to a superhero.

The Benjamin statue petition can be signed at Bookmark and Paradox bookstores in Devonport, or you can email your support to benjaminthelibrarycat@gmail.com.