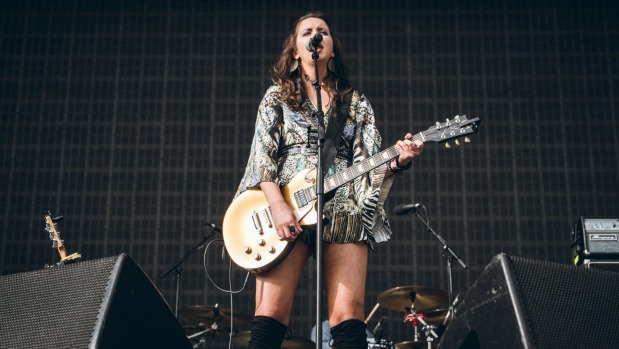 Opening for the Dixie Chicks in front of 25,000 people is something Waimate musician Kaylee Bell will remember forever.

“It was a total honour to be able to open for them, they are totally the ultimate band of country music,” Kaylee Bell said.

“It was quite a special thing to kind of share the stage and then go watch them, that’s something that doesn’t happen everyday.”

Bell saw the American country music stars perform in Australia a couple of weeks ago, and said it was exciting to see them play in New Zealand.

Bell played an hour-long set ahead of the Texas trio’s performance at Mission Estate winery, in Napier, on Saturday night.

While Bell was under no impression she would get to meet her music idols, Martie Erwin Maguire, Emily Erwin Robison​ or Natalie Maines, she did interact with members of the band’s crew.

“It would have been amazing to meet them but I had no expectations to … I know that they have security in place for a lot of reasons,” Bell said.

She described the many people, who work behind the scenes to help the Dixie Chicks perform, as being like “a big machine”.

“There’s so many people in their crew which help make it happen.

“They were really positive and gave us a lot of great feedback.”

The outdoor amphitheatre at the winery, the “vibe” and the massive stage and sound all added to the experience.

“It was pretty amazing, the whole set up at the Mission is world class, just unlike anywhere else.

“It’s one of those gigs that I’ll remember forever.”

It was “amazing” to have so many country fans in one spot in New Zealand, she said.

“To see them loving it and making lots of noise. It was great, a really cool afternoon of music.”

The evening was empowering, and had inspired Bell to work hard at her writing.

“I think it just proves that it all comes down to the song. They’re [Dixie Chicks] still singing songs from 10, 20 years ago. It just shows the power of what a song can do I think.”

Bell will spend the next few weeks touring Australia with Australian band The McClymonts, before heading to Nashville in May.

Her next single, Next Somebody, will be out in June.