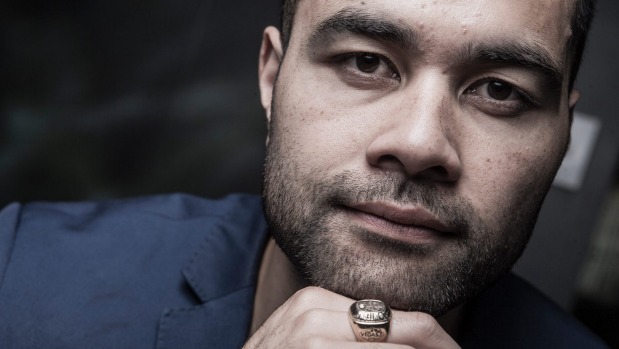 Let’s get one thing straight up front – everyone performing on TVNZ’s new a cappella singing series The Naked Choir will be 100 per cent fully clothed.

Instead, the ‘naked’ in The Naked Choir – the Kiwi version of a BBC series hosted by English choirmaster Gareth Malone – refers to the fact that all the singing groups featured are totally unaccompanied, with no instruments or backing tracks of any kind.

“It’s just the human voice,” says host Jeff Hunkin, a singer himself almost since birth by the sounds of it.

Sauntering on stage in a shiny blue suit, with shiny black hair, shiny white teeth and very shiny ‘doo wop-style’ silver microphone in hand, Hunkin looks the epitome of old-school cool – and has a voice to match.

Setting up the night’s proceedings – I’m sitting in on an episode being filmed in the Raye Freedman Theatre at Epsom Girls Grammar in Auckland – Hunkin reels off his opening lines in perfect radio announcer tones, nary a slip or stutter to be heard.

Hunkin is slick, he’s smooth, he is thoroughly prepared – traits which surely also come in handy at his day job as a communications advisor for TradeMe.

(It seems even working for the Kiwi online auction giant doesn’t help when you’ve got something you just can’t shift though – Hunkin has been trying to sell 50 glass bottles he and his wife used as table decorations at their wedding last year for months. “I haven’t gone to one dollar reserve yet, but I think that’s next on the cards,” he says.)

The slickness isn’t all show though. There’s a genuine likeability to Hunkin as he earnestly proclaims his love for singing in general – and a cappella in particular.

And he especially loves his role as host of The Naked Choir.

“It’s what I love, it’s a cappella music, it’s helping people get better at singing, it’s being on stage and doing those things that I love to do – I don’t think I would want to be anywhere else,” he says.

Not that Hunkin doesn’t have plenty of other places to be.

Apart from the aforementioned fulltime day job, this brand-new father has a wife and three-month-old daughter – born just a few weeks before his Naked Choir duties kicked off – at home in Tawa, Wellington.

“It took a lot of wrangling,” he says, of being offered the hosting gig at a time when his wife was pregnant with their first child.

“My first immediate answer was yes, and my second answer after that was, ‘I better think about it quickly and come back to you’.”

One quick phone call to his wife later and it was all on.

“I knew full well it would be a busy time,” says Hunkin. “But I thought it would be pretty silly of me to give up this experience. Of course it meant I was a little bit tired sometimes, but what a trade-off to be involved in something like this and to meet so many amazing a cappella groups from around the country.”

Singing has literally taken Hunkin around the world, from the islands of Hawaii to the River Rhine in Switzerland – not to mention Las Vegas, Nevada, where he and his fellow Musical Island Boys became the barbershop quartet world champions in 2014.

Hunkin was just 15 when the group formed at Tawa College in 2002. They competed in their first international barbershop contest in 2004, but it was after winning the international collegiate (under-25) contest in 2006 that doors really started to open for them.

“Often we’d sit there and think to ourselves, ‘Man, how did we end up here? How did four Pacific Island dudes who come from backgrounds that are certainly not amazing by any means – how did we end up doing all of these amazing things on the opposite side of the world and meeting so many amazing people, just from the pure fact of getting involved in this barbershop quartet singing program way back in high school? It’s been an amazing ride, for sure.”

Growing up, Hunkin’s bedroom walls were covered with posters of groups like The Jackson 5, Boyz II Men, and even Hanson – but perhaps his biggest musical influence was his father.

The youngest of three siblings – his brother Will is also a Musical Island Boy – Hunkin remembers singing three-part harmonies with his dad on guitar “at a very, very early age”.

“My dad used to compose all kinds of music and all kinds of songs, and my mum used to sing us lullabies before bedtime – so that musical upbringing has really been the catalyst for all the musical stuff we’ve gotten into later in life.”

Another musical hero is the late Michael Jackson, who Hunkin cites as an example of what it really means to be a singer.

“I always talk about that too, when I’m singing and when I’m coaching groups – if you mean what you say, if you believe what it is that you say, you can bring the message of the song to life so much easier than if you try and fake it.”